There's no shortage of great Miami hotel restaurants to book on Opentable, from the sun-soaked Lido Bayside Grill at the Standard Spa to Como Como, a wood-burning marisqueria at the newly opened Moxy Hotel in South Beach. But there's only one brick-and-mortar Opentable restaurant in town: Layla. The first restaurant operated by the online booking system is now open inside Kayak Miami Beach, the first hotel from its sister service.

And while the Kayak hotel, which opens on April 11, will feature subtle branding throughout, the team behind the bedouin-inspired restaurant hopes the latest advances in Opentable technology help you forget all about the online reservations platform while perched on a terrace overlooking a plate of baba ganoush and the oasis of the Collins Canal.

"We're the guinea pigs, not the customers," said Layla food and beverage director Daniel Levine. "This is really a design innovation lab for Opentable. For example, we can see everything you order with us, then leverage that to develop new technology. Say you always tweak a certain cocktail with your preferred spirit; next time you won't have to ask to have it your way."

The Opentable technology allows any server to treat any patron with a level of expertise once limited to waiters and bartenders who took personal pride in knowing their regulars. And as each new hospitality program is developed and perfected on site, those innovations will roll out to restaurants across the Opentable platform.

So what kind of cooking do you serve at a restaurant whose theme is futuristic hospitality? The oldest and most generous kind. The hotel and restaurant are managed by the team behind boutique hotel brand Life House, which scored a recent hit with Wildflower, a vegetable-forward dining room and natural wine bar that opened at their Denver hotel last November.

Days before Wildflower opened, Levine and Life House CEO Rami Zeidan were polishing off a final tasting when they received the green light to move ahead with their Miami Beach project. At the table that night they decided to draw on their shared Middle Eastern heritage, featuring the sharing plates that are a staple of Levant hospitality for their first (nearly) post-pandemic venture.

"We were inspired by the nomadic tribes that travel along the Levant—Israel, Jordan, Lebanon, Syria, Turkey—and how 5000 years ago they were considered the true inventors of hospitality, welcoming strangers to their camps and treating them as one of their own," Levine says. "What we love about this cuisine is it's made to share. It has a rhetoric that encourages human connection, and coming out of this period of isolation dining can be a powerful force in reuniting people."

That means dishes like labneh and hummus executed the way Levine's and Zeidan's families make it, flaming saganaki, and harissa-marinated tuna and tabbouleh with pita chips. Desserts like baklava come from Zaytouna Foods, a local kitchen that trains Syrian women refugees.

And if you're looking for some privacy after dinner, Layla is just as effective as putting some distance between diners as it is at reconnecting them. This is Miami after all, and what's a new restaurant without some level of exclusivity?

There's a reason the restaurant is called Layla, not Opentable. The name is taken from a Bedouin folk tale of two star-crossed lovers, Layla and Majnun, who were forced apart by their families. Majnun wrote Layla coded love poems to arrange a secret rooftop rendezvous where they reunited. Enter Majnun, the restaurant's invite-only rooftop bar serving experiential cocktails like blue flaming gin poured from a genie lamp. Alas there's no Opentable algorithm for deciding who gains access. At least not yet. 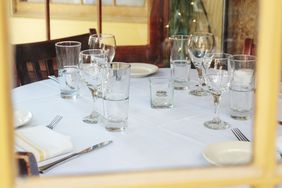