I'm crying in a quick-service restaurant in Oklahoma City. Chalk it up to a long day of traveling, or chalk it up to this: I'm holding the perfect beef burger with sweet, cheese-topped fried onions, smashed between fluffy buns, the tang of pickle punctuating each bite as mayonnaise becomes one with the mustard.

I'm at Tucker's Onion Burgers, a local OKC franchise with four locations that specializes in one of the state's most beautiful delicacies: the onion burger. People eat onions, fried or otherwise, on their burgers everywhere, but this one is different.

"In my mind, the most important thing to know about the onion burger is that, like a lot of Oklahomans who enjoy it, it's a humble food," said Cameron Coit, an Oklahoma-born New Yorker who worked in restaurant kitchens for years. "It was born from the depression, so it's simple: Onions. Meat. Bun. That's all you need. I personally take mustard and a little pickle on mine, but nothing else. Anything else, and it ceases to be an onion burger.

Indeed, the onion burger originated out of economic necessity, at least according to Tucker's' telling of the story.

"In the 1920s, a smattering of cafés in Western Oklahoma sought ways to stretch beef further in their menu offerings," the restaurant's site reads. "Cooks found that ground beef pressed with a pile of thinly shredded onions not only tasted good but helped cafes stay profitable as the Great Depression loomed. Soon, diners and cafés all over Oklahoma were serving fried onion burgers, and they have been a staple ever since."

When I told my colleague and America expert, David Landsel, that I was heading to Oklahoma City, he insisted I experience the onion burger, starting at Tucker's.

"It's a whole thing," he said. "Tucker's casually uses Creekstone Farms beef and buries it in a mountain of grilled onions and sells it to you for like $5, no big deal."

At Tucker's, I accompany my single onion burger — which is, in fact, a big deal — with a side salad, which is essentially just a container of Fritos chips smothering a handful of iceberg lettuce, pinto beans, and cheddar cheese. It's perfect. The french fries are crisp, thin, and conservatively salted, the way they should be. I scroll through Instagram, eating and crying, and see that another one of my friends has completed a 5K. I'm happy for her. I really am.

Hours later, I meander over to Garage Burgers and Beers, a slightly bigger Oklahoma-based chain (but this one has cocktails), to get my fix. The burger here is fantastic, too: onion-packed, perfectly greasy, flavorful, and cheesy. I wonder if there's any way to cancel my flight home.

"Fried onions with a little hamburger meat and a bun is how I would describe the onion burger to an outsider," said Coit. "It must be smashed down. They cook it quick."

Coit added that the most famous onion burger can be found at Sid's Diner in El Reno. (After discussing the topic with several Oklahomans, it's clear that the onion burger capital is widely considered to be El Reno, which is about a 30-minute drive from OKC.)

"It's the OG spot," he said. "Honestly, it's not all that different from Tucker's, taste-wise, but it's not as fancy, if I can even say that about an onion burger."

Well, it looks like I have to go back to Oklahoma to taste for myself. This is my life now. And I could not be more pleased with it. 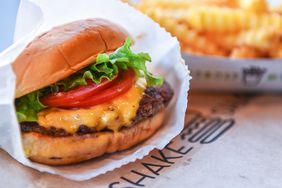 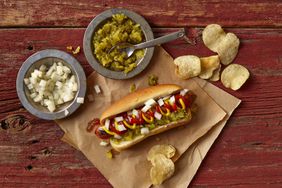