The effect of "smoke taint" on hops is similar to the issues grape growers have reported, but even less understood.

On Tuesday, Seattle's Fremont Brewing announced that it was finally ready to release this year's Cowiche Canyon Fresh Hop Ale and its Hazy Cowiche Canyon. "Thank you all for your patience as we gave these beers the extra love and attention they needed," the brewery wrote on Instagram.

In a previous post, Fremont Brewing explained that the annual ale would be slightly delayed because of effects from the wildfires that have burned across the Pacific Northwest this year. According to KING 5, Washington and Oregon have reported 77 large wildfires this year which had already burned over one million acres by mid-August.

Washington and Oregon also produce over 80 percent of the hops that are harvested in the United States, and brewers in the region have realized that the smoke from all of those fires has had a negative effect on this year's crop. "The smoke infiltrated the hops, so we delayed this year's Cowiche Canyon because it simply did not meet our standards," Fremont explained on Instagram.

Fremont's owner, Matt Lincecum told KING 5 that around 2,000 pounds of their 37,000-pound hops harvest had been damaged by smoke taint. "You can see some of the damage," he said. "They're yellow instead of that bright green character, they're a little bit yellow [...] you notice it really well, you notice it immediately. It has a different aroma to it."

Lincecum and his team spent the weekend centrifuging the hops to try to remove the lingering "smoke character" so that they could use them for the Cowiche Canyon release. It worked — although Lincecum believes that this isn't going to be a one-time thing. "We will see this next year," he said. "We believe in climate change [...] we don't know why it was just this particular harvest, but that's what we are trying to figure out."

Last year, brewers in Oregon had to deal with the effect of smoke and ash from wildfires that overlapped with their own hops harvests. According to Spirited, some hops growers either shortened or cut back on harvesting shifts because of the heavy smoke that lingered over the fields, and some breweries hesitated to use the hops that had been visibly covered with ash.

"The biggest concern is that the smoke influence will carry through, and the beer aroma or flavor will be off because of it," Michelle Palacios, an administrator for the Oregon Hop Commission, said. "We don't have enough experience with wildfire exposure on hops to know what to expect: Maybe we'll find out it's none."

An Oregon State brewing chemist agreed that there hasn't been enough research to determine what kind of impact wildfire smoke and ash can have on hops. "I think we can look to the wine industry and use that as a guidepost, but the grape analogy only goes so far," Tom Shellhammer said.

California wineries have long had to contend with smoke taint damaging their grapes, which has caused similar feelings of hesitancy and uncertainty about whether to use (or sell) those crops. Last year, there were so many large wildfires that laboratories that test grapes for smoke damage had lengthy backlogs because of the number of samples that were submitted for analysis. (And one Napa winery teamed up with a master distiller to turn its own smoke-tainted wine into an appropriately smoky brandy.)

If Fremont Brewing's Lincecum is right, the next few years may provide a lot of opportunities for researching the effects of smoke on hops — but getting those answers could come at a tremendous cost to growers and brewers. 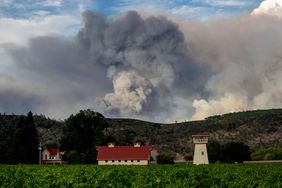