"It's about being grateful for everything that nature has to offer," says the n/naka chef.

Niki Nakayama does not want to talk about being a female chef. At her celebrated Los Angeles restaurant n/naka (one of our World's Best Restaurants), the delicacy of kaiseki demands her full attention. There is the process of dehydrating lettuce leaves, for example: They will be ground into the finest of salts and powders, to be dusted on one or more of the 13 courses at each night's set menu. The extensiveness of the dishes—both in quality and quantity—characterizes the ceremoniousness of kaiseki. Nakayama's command of the approach has earned her a semifinalist title for the James Beard Award's Best Chefs America. Twice.

The spirit of kaiseki is also embodied in n/naka's yuzu kosho, as of late. The pepper paste is fermented with California bergamot, that bounty of Los Angeles winter, instead of the traditional Japanese citrus. This reverence for nature is at the heart of kaiseki; Seasonality and locality are secondary benefits, not pursuits in and of themselves. This is a practice that Nakayama has diligently honed over the years, which contributes to the intentionality of her cuisine.

And yet, being a female chef, she rarely gets asked about it, she says. "And that's a little unfortunate."

Despite her popular acclaim—intensified since being profiled on Netflix's Chef's Table—the chef says she mostly gets asked about topics of gender. And she wanted this interview to be different.

"It's not so much that we don't think it's an important issue or that women who have struggled through those systems don't deserve to have their stories told," she says. "It's just that we can't speak to those experiences directly or authentically."

Nakayama works along her sous chef Carole Iida-Nakayama, who is also her wife. They met when Iida-Nakayama, an accomplished chef in her own right, applied for a job at n/naka. "At the end of the day, ​neither Niki or I have experienced sexism because we have our own restaurant, which is very different from being a chef under someone and having to take orders from them," Iida-Nakayama says.

Instead, the team is able to devote their energies to the intricacies of kaiseki, which demands their full instincts. The deeply rooted philosophy is as naturalistic as it is ceremonious; ingredients should shine simply of themselves, and yet their presentation is undoubtedly elevated.

"It's about being grateful for everything that nature has to offer," Nakayama says. "It's about bending to nature, instead of the other way around." In that spirit, the menu is ripe with kabocha squash from the couple's garden, which in summer months yields as much as 40% of the restaurant's produce. There are also appearances of lesser known fauna, found at farms along California's coast: Ice plants for example, an invasive species which, depending on the season, are endearingly crystallized to appear freshly dewed. Other fare—some far flung, some homely—is sourced at the Santa Monica Farmers Market, a mecca for Los Angeles chefs. Nakayama and her wife have also been known to forage in the Angeles National Forest, though it's been harder to get up there this year.

They weren't always so experimental in their embrace of California ingredients, however. At first, in Nakayama's efforts to be faithful to kaiseki, she strived to "recreate a restaurant that you would find in Japan." It's a country where she spent three years working, including at her relatives' ryokan, an inn where she intensely studied the philosophy that would become the driving force of her restaurant.

Soon, however, she came across a paradox: In order to stay true to kaiseki's platonic ideal, she had to deviate from its form. "Kaiseki philosophy talks about the area that you're in, the food that's there, and how it should be a nice representation of your location," she says. "So with that in mind, we shifted to represent California ingredients. We've learned more about California and what it has to offer. It's being grateful for this moment that we've been given."

Her kaiseki is more modern and less extensive than its Japanese counterparts, by her own admission; it's stunningly visually showcased on her season one appearance of Netflix's Chef's Table. When the series debuted in 2015, it broadened her regional halo—glowing reviews in the L.A. Times and L.A. Weekly—into a national spotlight. Her story of having to prove herself as a woman also personally resonated with many people, reaching more than just gourmands.

"I'm kind of trying to process everything that's happened since then," Nakayama says. "Many of our guests who watched it have strong emotional reactions, whether they can relate to the our struggle of the underdog or not."

"I feel like people who come in to dine have a better understanding of our intentions now," she says. "But we also understood that people will have higher expectations. As chefs, we feel really responsible to have that expectation met and not undercut that."

For Nakayama, a part of honoring this trust is never repeating a set menu for a returning diner—save perhaps for her abalone pasta, which is a favorite. "It's our way of showing appreciation [to the diners]," she says.

"On some level, yes, it can be a nightmare because we have ten different menus to think about on a particular day, but it's kind of like a gift," she says. "If you know what you're getting, it's not as fun."

This constant responsiveness is, in some ways, an extension of kaiseki itself. And it's an approach that has served Nakayama well. 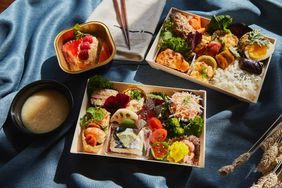