Necco Wafers Are Officially Back

Fresh batches will hit drugstores first, arriving as soon as this week.

You can’t keep a good candy down. Actually, it turns out you can’t even keep candies kids notoriously dislike down. Necco Wafers will be back on shelves as soon as this week—the latest product to return from the defunct Necco brand’s line of controversial confections.

Back in 2018, Necco—one of America’s oldest candy companies—went out of business, leaving a number of well-known but polarizing products in limbo, including Sweethearts Conversation Hearts, Clark Bars, Mary Janes, and the eponymous Necco Wafers. Nearly all of these brands have been snapped up by someone. For instance, Sweethearts are a Valentine’s Day classic, so Ohio’s Spangler Candy Company has been pushing to get them back into production. The Clark Bar has its roots in Pittsburgh, so Pennsylvania’s Boyer Candy Company decided to bring the bar home. Heck, even Mary Jane—those peanut butter chews that made it easy to decide which houses to T.P. on Halloween—found a new producer, according to CandyIndustry.com.

But what about Necco Wafers? The flavored discs are historically significant, first produced over 150 years ago in 1847, but they are also often unfavorably compared to chalk. Plus, with Necco unable to keep the lights on, was the writing on the wall for the company’s signature wafers?

Well, stop worrying, chalk-lovers! According to Today Food, fresh (or at least as “fresh” as they can be) Necco Wafers are “set to hit store shelves in just a few days” after a two-year absence.

“We've always admired the brand and how it's woven in with the fabric of our culture,” Kirk Vashaw—chairman and CEO of Spangler, which has the wafers in their ex-Necco portfolio—told the site. “It's neat to be eating a candy that was carried by Civil War soldiers, and taken on Arctic and Antarctic expeditions, and issued to GIs in World War II as a morale booster. It's a piece of our history.”

Vashaw said they use the same classic recipe from the past, featuring eight iterations per pack—lemon, lime, orange, clove, cinnamon, wintergreen, licorice, and chocolate. Only that final flavor is slightly different. “Connoisseurs may notice a slightly richer taste to the cocoa,” Vashaw added. “It's the same flavor, but we use a slightly different process. To our palate, it brings out the flavor a bit differently.”

The packaging hasn’t changed either. “We kept the wax wrap around the roll exactly the same,” he said, “and used the same supplier and everything.”

Today Food reports that drugstores and pharmacies will get the re-released Necco Wafers nationwide first, with batches arriving by the end of this month or early June. Other outlets will likely start receiving their Necco Wafers in July. 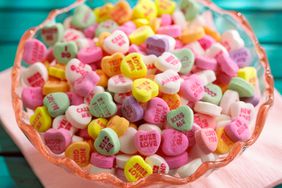 Why Your Candy Hearts May Be Conversation-Free This Valentine's Day 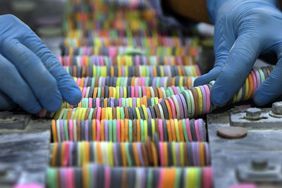