After a test run in 11 states, Natural Light Vodka is coming to "every corner of America."

One of the big selling points of Natural Light is that it's available. You can't always get a can of your favorite local lager, but if you walk into a store, and all you want is cheap beer, usually you can find Natty Light — occasionally in huge boxes — and it checks both the cheap and the beer boxes.

So last August, when Natural Light released its own flavored vodka, it's safe to say they weren't looking to set the spirits' world on fire. With three flavors inspired by the brand's fruit beer line Naturadays — Lemonade, Strawberry Lemonade, and Black Cherry Lemonade — and a suggested $15 price tag, Natural Light Vodka was definitely aimed at the beer brand's existing fan base. And now this 30% ABV vodka is doing what Natty Light does best: It's become available nationwide.

After what Natty Light described as "a successful pilot launch last fall" in eleven states, the brand says these vodkas can now be found "in every corner of America" in both 750 milliliter and 50 milliter bottles.

"Within hours of launching Natty Vodka last year, Natty fans were asking us to bring our flavored vodka everywhere in the U.S.," stated Daniel Blake, group VP of marketing for Budweiser & Value at Anheuser-Busch, which makes Natural Light. "We knew we needed to go big with the national expansion, and there's nothing more electric than having Steve Aoki perform at your house party."

Oh, yeah, as for that last part, it's not a Natural Light announcement without some sort of contest, and for this national vodka release, the brand is giving fans the chance to win a Vegas-style residency weekend from DJ Steve Aoki in their own living room. (You can enter at naturallight.com.) This arrives on the heels of a promotion earlier this month where Natural Light was giving fans the chance to win free beer just for getting a mullet.

Okay, but when will they give the fans what they really want: a Natty Light Vodka 30 rack? 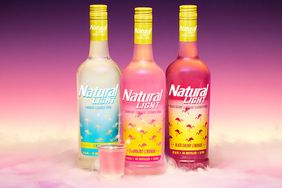