At Tocabe, a fast-casual Native American concept in Denver, co-founder Ben Jacobs grapples with a movement

“Native American food is not a trend,” Ben Jacobs says. “It annoys me when we treat foods like the next hip thing. That food, there’s a people behind it.”

He’s a tribal member of the Osage Nation and the co-founder of Tocabe, a fast-casual Native American concept with two locations in Denver, Colorado. The company also has a food truck and is working on opening a third location—and this qualifies them to be the country’s largest Native American restaurant chain.

Tocabe’s must-try order is probably the shredded bison Indian taco: it’s fry bread—a deep-fried, crispy-on-the outside, chewy-on-the-inside disk, which is then topped with fork-tender bison. It’s been spice-rubbed and simmered for 13 hours in its own housemade stock. The whole thing is lashed with ancho chipotle sour cream and a shower of salsas. You can choose, Chipotle-style, to top it with hominy pico de gallo, pumpkin and sunflower seed mix, roasted green chiles or sweet corn. This is Tocabe’s ninth year.

“On this continent, we have the oldest culture,” Jacobs says. “But in many ways we have the youngest cuisine.” Native American food has been unknown for so long to the American population, he says, relegated to the private sphere of homes and community gatherings.

Given the popularization of far-flung fare like gochujang-laquered wings and omakase, it’s ironic but welcome that North America’s oldest food culture, present all this time, is finally getting its due.

“I worked in restaurants for a long time, and it never even crossed my mind to start this kind of restaurant," he says. "You might learn French techniques in culinary school, but then you go and you cook this food at home. Growing up, I never saw Native food in places like The New York Times. And now you see that. And that’s inspiring."

At Tocabe, a lot of the recipes are inspired by those of Jacobs’s mother and grandmother, who have roots in Oklahoma’s Osage Nation, a tribe that’s historically occupied the Great Plains. His father is of Scottish descent.

Traditional Osage cuisine, Jacobs explains, might entail corn soup, hominy soup and maybe wild onions, which can be found in parts of Oklahoma. There’s also a sweeter dish of grape dumplings, which sounds like what it is: dumplings cooked in grape juice. “A lot of this is from the relocation era,” Jacobs says. He’s referring to the mid-1900s, when many Native Americans were forcibly removed from reservations and “resettled” into urban areas. Denver became a nexus in this migration, and is one reason why it’s unsurprising to find a place like Tocabe in the city. Jacobs’s parents had actually opened their own Native American restaurant in the Denver area in 1989—it was called Grayhorse. It lasted successfully for two years—eventually, though, the demands of running a restaurant and a family proved to be great.

Jacobs also acknowledges that people just might not have been as ready for a Native American restaurant then. “Even when Tocabe opened in 2008, things were so different,” he says. Since then, the rise of Instagrammable food and proliferation of food media has made it easier for places like Tocabe to thrive.

“I do want to give respect to the people that have been doing this for 30 years and haven’t had the reach. Now we have this amazing platform,” he says.

As mentioned, Tocabe draws a lot from Osage cuisine, which features meats cooked over an open fire. “We try to recreate that feeling as much as possible in an indoors commercial kitchen,” Jacobs says. “Does it mean that it’s 100% true to how our ancestors ate? Probably not.”

This tension between history and the contemporary lens is one with which Jacobs has been confronted. “There’s a complex history around fry bread, so I’m totally open to having that conversation,” Jacobs says—he’s referring to the fact that fry bread originated in the mid 19th century when Native Americans were forced to rely on U.S. government rations of flour, salt, and water. Fry bread, which is basically limited to those ingredients, was the culinary adaptive response.

Furthermore, given the fluency and multiplicity of Native cultures—there are over 500 tribes, Jacobs says—the question of what makes something “Native American” is one that Jacobs has had to deal with.

Some people expect something more Sean Sherman-esque when walking into Tocabe, for example: a pre-colonial cuisine stripped of contemporary interpretation. And while Jacobs has the utmost respect for Sherman—”He’s doing such great work,” he says—he rejects the idea that Native chefs shouldn’t innovate. “Native American cuisine and culture has a right to evolve and grow like other cultures,” Jacobs says. “There’s this romanticized image that we’re trapped in sometimes, black and white photos and braids in our hair, feathers. They don’t realize that we exist, and that we’re not just in a book.”

A lot of the identity of Tocabe is also informed by the story of the ingredients it uses—many sourced from tribes all across the nation. “Olive oil is not a traditional ingredient but there’s a tribe out of California that makes some amazing olive oil. I want to support that,” he says. (It’s called Séka Hills Olive Oil by the way, and it’s made by the Yocha Dehe Wintun Nation outside of Sacramento. “They have one of the most sophisticated oil presses in the whole country,” Jacobs says.)

At the end of the day, what’s most important to Jacobs is the fact that Native culture and cuisine is being portrayed by the communities themselves. “Far too often, our stories have been told by others,” he says. “The biggest thing we need to do is to create a supportive community of growers, seed savers and chefs. As Native food professionals, we need to support one another.”

To future chefs, he says, “If you have a passion and you want to go for it, talk to anybody that has a wallet. We were bussing and barbacking and checking IDs at restaurants before this; it’s not like we had a ton of money. Don’t be afraid of your vision.” 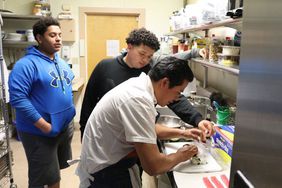 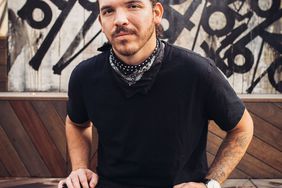 Why Casey Lane Is Dominating Late-Night Dining in L.A.