Supply issues behind the scenes range from not enough truckers to a not enough glue.

Not long ago, when the Covid pandemic had movie theaters shuttered, America was dealing with a popcorn surplus, leaving suppliers debating how to unload the 30 percent of popcorn typically consumed away from home. But now, with theaters not only open, but dealing with record-breaking demand from films like Top Gun: Maverick which saw the highest-grossing Memorial Day weekend ever, the industry is now worried about the opposite: a popcorn shortage.

As with many current shortages, popcorn's difficulties stem from a variety of factors — things like increased fertilizer costs cutting into the profits of farmers, a lack of truckers to transport kernels around, and even supply issues with the linings that protect popcorn bags, according to the Wall Street Journal. "Popcorn supply will be tight," Norm Krug, chief executive of the popcorn supplier Preferred Popcorn, told the paper.

Ryan Wenke, the director of operations and technology at Connecticut's Prospector Theater, explained to NBC New York just how multifaceted and unpredictable the problems with selling popcorn have become. "For a certain time a few months ago, it was difficult to get the canola oil for the popcorn," he said, "and it wasn't because they didn't have enough oil. It's because they didn't have the glue to enclose the box that the oil bib goes in."

Finding the packaging for theater goers has also been an issue. Jeff Benson, founder and CEO of Cinergy Entertainment Group which runs eight theaters said his company was struggling to get popcorn bags telling the WSJ that the situation was "a mess." And Neely Schiefelbein, sales director for concession supplier Goldenlink North America, agreed. "At the end of the day," she told the paper, "they have to have something to put popcorn in."

But Krug told the WSJ that ongoing issues with producing popcorn kernels themselves could be the more long term issue. He's worried the farmers he works with could switch to more lucrative crops and is already paying farmers more for the popcorn they are growing. And he believes as the war in Ukraine drags on, fertilizer costs could continue to go up, pushing the profits from growing popcorn further down.

The Wall Street Journal's prediction: Though most of the current popcorn drama is taking place behind the scenes, things could reach a head during the busy holiday movie season. 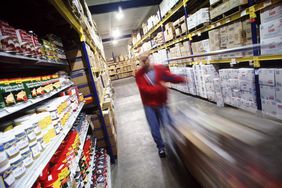