The chocolate-covered cookie and marshmallow sandwich has been around for over 100 years. Here's how it became a cultural icon.

The specifics behind the MoonPie's origins might be a little hazy (one aficionado believes aliens were involved in its creation), but the classic snack's ability to withstand the tests of time and generations of tastebuds make its success somewhat "out of this world."

As the story goes, the original Moonpie — a graham cracker cookie and marshmallow sandwich dipped in chocolate and four inches in diameter — was first made in 1917, after traveling salesman Earl Mitchell attempted to answer the hungry pleas of local miners. One version of the story says Mitchell got the idea for a snack "as big as the moon" after talking with Kentucky coal miners eager for a way to satisfy their stomachs during their short breaks. One miner reportedly even held his hands up to the sky and framed the moon to let Mitchell know just how big the snack should be.

Speaking to the New York Times back in 1986, MoonPie's president (and grandson of the bakery's founder) Sam Campbell IV recalls what he was told transpired after Mitchell marched into the bakery now responsible for producing one of America's favorite cellophane-wrapped snacks for 100 years.

''You know what you need,'' the salesman said, according to Campbell IV. ''You need two big round cookies. You need some marshmallow filling in between, and you need chocolate icing on the outside. And it's got to be as big as the moon.''

In their early days, MoonPies cost only a nickel and were produced alongside the bakery's 100 other goods. The inexpensive and filling snacks became a hot commodity for the country's working class, as well as field hands and other rural Americans. Especially popular in the South, they were often paired up with a nickel RC Cola.

The MoonPie's rapid rise in the 1920s and '30s was just the beginning. It solidified itself as a staple of American culture during World War II after the sweet sandwiches were sent to soldiers overseas, something still done in recent times. On the homefront, MoonPies followed workers from the south as they traveled to work in northern steel mills and in Chicago and Detroit's automobile plants.

It wasn't until the 1960s and '70s that the MoonPie product really began to evolve. While the Chattanooga Bakery first opened in 1902, after it began selling MoonPies in 1917, they became so popular the bakery ceased production on all of its other items. The original MoonPie dominated the bakery's production cycle until the company introduced the Double-Decker Deluxe and added new flavors like Vanilla and Banana.

The bakery, which does very little advertising, has grown even more since then. Currently, they produce over a million MoonPies a day that are sold in tens of thousands of stores with added flavors like Strawberry, Salted Caramel, and Orange (available only during Mardi Gras). You can pick up a box at retailers like Walmart, Cracker Barrel, and Dollar General.

The MoonPie menu wasn't the only thing that expanded. In the '80s, Ron Dixon wrote the only published history on the chocolate-dipped cookie classic, The Great MoonPie Handbook. The treat also became the customary item thrown during Mardi Gras, and in Mobile, Alabama, you can ring in the New Year by watching a 600-pound electronic MoonPie drop from the sky. There are also several MoonPie General Stores in eastern and middle Tennessee, where you can pick up merchandise, gifts, and special confections.

To celebrate the snack's centennial in 2017, Chattanooga Bakery sent an RV, the MoonPie Memory Mobile, around the country to thank fans for their commitment to the confection, doling out MoonPies made with the original 1917 recipe.

"MoonPie has sort of woven its way through American culture," said Tory Johnson, vice president of sales and marketing for MoonPie. "A lot of people consider us the original s'more, so in that regard, it's a great all-American food. It's also got a funny name that you can't forget once you hear it."

The History of S'mores: Ancient Greeks, Girl Scouts, and One Very Puritanical Minister
Was this page helpful?
Thanks for your feedback!
Tell us why!
Related Articles 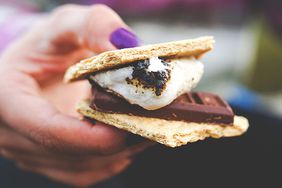 The History of S'mores: Ancient Greeks, Girl Scouts and One Very Puritanical Minister