Mona Lisa Smeared with Cake By Protester Disguised as Tourist

The incident took place on Sunday in front of a typical crowd of onlookers.

A protective layer of bulletproof glass prevented the Mona Lisa from enjoying a bit of cake on Sunday afternoon, but the stoic portrait didn't even flinch when a protester hurled the dessert in her direction.

In the typically-crowded Salle des Etats, the room where the painting is exhibited at the Louvre in Paris, an unnamed 36-year-old man disguised as a woman in a wheelchair threw what the museum later described as a concealed "patisserie" at the famed 16th century Leonardo da Vinci painting. The Louvre suggested that the protester used a wheelchair to take advantage of their reduced mobility policy which allowed him closer access to the artwork.

Photos and video taken in the immediate aftermath of the protest show the protective glass covered in a smear of cake before museum staff eventually wiped the glass clean, receiving a round of applause from onlookers.

The Louvre stated the painting was in no way damaged during the incident. The Mona Lisa has been protected by glass since the 1950s and had its now-bulletproof case updated as recently as 2019. "The museum salutes the professionalism of its agents who reacted immediately during this incident," the Louvre said. "It's also a reminder that monitoring national collections is at the heart of their mission."

As for the protester, he was filmed being escorted from the museum by security — still wearing an apparent wig and with his wheelchair in tow — speaking in French, stating, "Think of the Earth! There are people who are destroying the Earth! Think about it. Artists tell you: think of the Earth. That's why I did this." The protester also had a rose with him, and rose petals can be seen scattered on the museum floor.

The Louvre said the man was turned over to police, and yesterday, the Paris prosecutor's office stated that he had been sent to a police psychiatric unit, according to the Associated Press. An investigation has also been opened into the damage of cultural artifacts.

As possibly the world's most famous piece of art, attacks on the Mona Lisa aren't unheard of. Over the years, the painting has apparently faced the likes of acid, a rock, a teacup, and spray paint. 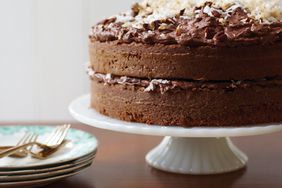