A $5,800 Bottle of Japanese Whiskey Is Missing from the State Department's 'Gift Vault'

The pricey spirit's whereabouts were under investigation after being presented to the previous administration.

At the end of the summer, the U.S. State Department announced that it had launched an investigation to determine the whereabouts of several items that had been presented to State Department officials during the previous presidential administration. According to NBC News, some of the items that were missing from the Department's "gift vault" — yes, that's a thing — included a commemorative gold coin, eight porcelain and copper vases that were worth close to $20,000, and a $5,800 bottle of Japanese whiskey.

On Thursday, the State Department's inspector general said that some of the unaccounted-for items had been located — those $20,000 vases were discovered in a storage facility — but neither the gold coin nor the whiskey have been recovered.

The bottle of whiskey was a gift for former Secretary of State Mike Pompeo from the government of Japan. The New York Times reported that Pompeo may not have actually received the gift; the department's records indicated that he was traveling in Saudi Arabia on the day that the whiskey was presented to State Department officials.

According to the Times, government officials can keep any gift that is valued at $390 or less, but if they want to keep a more expensive item, they have to purchase it at the appraised value from the Treasury Department. They can also donate a gift "of a certain value" to the National Archives. (A former director of the Office of Government Ethics told CNN that failure to disclose the receipt of a gift from a foreign government could result in criminal prosecution, in a civil penalty of up to $50,000, or even in jail time.)

Mike Pompeo has always maintained that he never received the whiskey. "I assume it wasn't ever touched. It never got to me," he said during a previous interview with FOX News. "I have no idea how the State Department lost this thing [...]. Had it been a case of Diet Coke, I'd have been all over it."

During its investigation, the Inspector General's office determined that the Gift Vault had been accessed more than 3,000 different times by 77 different people between August 3, 2020 and January 31, 2021. The State Department says that it has since updated and changed its security protocol to prevent vases, gold coins, or pricey bottles of whiskey from disappearing in the future. 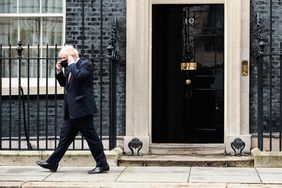