Why One Michigan Lake's Sturgeon Fishing Season Lasted Only 35 Minutes

The state Department of Natural Resources puts a strict limit on the threatened species at Cheboygan County's Black Lake.

Last month, Michigan's Department of Natural Resources (DNR) announced that its annual sturgeon season on Cheboygan County's Black Lake would start at 8 a.m. on Saturday, February 5, and would continue no longer than 2 p.m. on Wednesday, February 9. In order to prevent overfishing, the DNR set a six-fish limit for this year's season — and that's not per angler, that's six fish, total.

That single-digit limit meant that the Black Lake sturgeon season lasted all of 35 minutes. The first sturgeon, a 48-pound female, was caught at 8:10 a.m., and the sixth, a 35-pound male, was caught at 8:35 a.m., and that was it for the year. The 565 registered anglers who were eagerly standing in fishing shanties or around holes they'd cut out of the lake's frozen surface were all sent home until next February. (By contrast, last year's season lasted just over two hours.)

"That's it," fisherman William Bailey shrugged to The Alpena News afterward. "It was over as soon as it started." His odds were even slimmer than the others who stood on the ice: his fishing partner didn't bring a saw to the ice-covered lake, so they couldn't cut a hole to even look for a fish.

Although other Michigan lakes have their own sturgeon seasons later in the year, Black Lake is unique because anglers can keep any sturgeon they spear. (However, there's an across-the-board one sturgeon-per-angler limit for the season, regardless of where it's harvested.) Half of the other state waters that permit sturgeon fishing require all of them to be immediately released, while the other half have size limits that determine whether or not the fish can be kept.

The lake sturgeon is a threatened species in Michigan, and for the past two decades, Federal, State, and Tribal agencies have worked together to help rehabilitate the fish through the use of Streamside Rearing Facilities and by limiting the number of sturgeon that are allowed to be caught every year. A DNR Senior Fisheries Biologist told The Alpena News that there are between 1,100 and 1,200 adult sturgeon in Black Lake.

Part of the reason sturgeon populations drastically declined in the 20th century was due to an increasing number of people developing a taste for sturgeon caviar. "People just massacred them, just like we massacred the buffalo," Inga Saffron, the author of the book Caviar, told the Associated Press in 2019. "The difference being they were catching the sturgeon as they were migrating to spawn. Not only did they kill the fish, they killed future generations of fish."

In both Michigan and neighboring Wisconsin, sturgeon-spearers are allowed to keep the roe that accompanies their catch, but Wisconsin stipulates that the roe can't be sold. Last year, the state was riveted by a scandal involving a Wisconsin DNR biologist who'd been nicknamed "The Sturgeon General" for his decade-plus of overseeing the annual sturgeon season.

After a lengthy investigation that included the DNR and the U.S. Fish and Wildlife Service, Ryan P. Koenigs was charged with one count of misdemeanor theft for illegally trading sturgeon eggs and one count of obstructing a conservation warden. He admitted to the agencies that he had taken some of the sturgeon eggs that anglers donated to the DNR for research to local caviar processors and that he accepted "20 to 30 jars [of caviar] annually" in return for his donated donations. Some of the caviar was allegedly served in DNR staff meetings, and some of it was given to local bars.

Wisconsin's own sturgeon spearing season opens on Saturday, February 12, and it will last for either 16 days or until its harvest caps are reached. So, probably a little longer than 35 minutes. 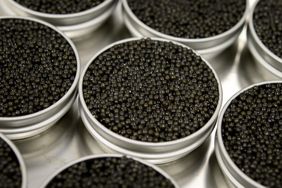