When Michael’s Genuine Food & Drink opened last year, it wasn’t just one of Miami’s first excellent American bistros. It was also the first good place to eat in the Design District, home to cutting-edge home-furnishings and clothing shops and contemporary-art galleries. Chef and owner Michael Schwartz, a Philadelphia native who launched the pioneering South Beach restaurant Nemo in 1994, calls his latest spot “a chef’s interpretation of a great neighborhood place.”

He sources superior ingredients from local producers, from the sweet Florida onions he stuffs with spiced lamb to the chorizo and shrimp that top his thin-crust pizza. Dishes like these have made Michael’s the de facto clubhouse for Miami’s design and art intelligentsia, as well as a destination for people who never used to venture to the Design District unless they were tagging along with their decorator.

“Michael’s is the geographic and social epicenter of the Design District,” says Daniel Kron, owner of the whimsical kids’ store Genius Jones. “It’s the first place we go to for business meetings, staff dinners and just for a great lunch.”

Art collector Rosa de la Cruz, who is building a three-story Design District space to display multimedia works, finds herself drawn to Michael’s for lunch and dinner on the same day. “The District used to be a ghost town,” she says. “It’s still not Manhattan, but it’s going in the right direction.” 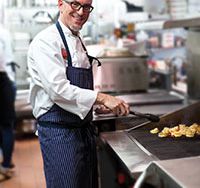 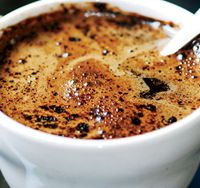