Private shipping companies like FedEx can deliver alcohol, so why not the Postal Service?

Democratic Representative Jackie Speier of California and Republican Representative Dan Newhouse of Washington, along with 17 other House co-sponsors, introduced the "USPS Shipping Equity Act" on Monday which would allow the Postal Service to ship alcohol as long as it complied with all other state and local laws. A companion bill was introduced in the Senate by Democratic Senator Jeff Merkley of Oregon. The proposed legislation also arrived with support from unions and associations covering all sides of the industry—beer, wine, spirits, and even those working delivering our mail.

"Currently, the U.S. Postal Service cannot ship beer, wine, or distilled spirits, because of an outdated, Prohibition-era ban. This nonsensical regulation limits shipping options for producers and customers alike, affecting many of Central Washington's local craft breweries and wineries," Newhouse said in announcing the bill. "The USPS Shipping Equity Act would give rural producers access to another option for shipping alcoholic beverages, thereby increasing market access and enabling Central Washington businesses to continue to invest in our communities."

Speier also chimed in with some important stats to her own constituents. "In 2019, California wineries shipped 275.6 million cases of wine, yet consumers and manufacturers are prohibited from using the U.S. Postal Service to ship or deliver these everyday products," she explained. "In most states, private carriers such as FedEx and UPS are already delivering alcoholic beverages. It makes no sense to create a competitive disadvantage for the USPS by barring them from these kinds of shipments, especially given the Postal Service's dire financial condition."

Speaking of a disadvantage, a change in rules could generate major moolah for the USPS. "The shipping of alcohol would not only be a source of $50 million a year in revenue for the Postal Service, but would also help grow local breweries, distilleries, and wineries," National Postal Mail Handlers Union President Paul Hogrogian said, throwing his support behind the announcement. "It's time fix this Prohibition Era regulation, allowing the United States Postal Service the same access to shipping goods as our private sector counterparts."

Specifically, the bill would give the USPS two years to create a system to implement the law, assuring things like age and identification checks. Newhouse also points out that the legislation would expand the number of Americans able to order alcohol for delivery since, unlike private companies, the Postal Service ships to every household in the country. 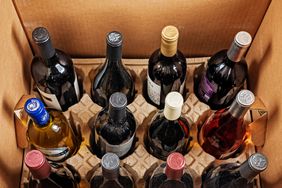 How to Ship Alcohol