The improved pie includes more pepperoni, but it won't be five bucks anymore.

Pandemic-induced inflation has increased the price of nearly everything, and pizza is no exception. Back in November, we covered the sad reality that New York City's iconic dollar pizza joints were forced to jack up the price of their $1 slices. Now, a national pizza chain known for its value has also made some tweaks: Little Caesars' standard Hot-N-Ready pizzas no longer cost $5.

In an announcement yesterday, Little Caesars touted its "new and improved" Hot-N-Ready Classic Pepperoni pizza, now featuring 33 percent more pepperoni, providing customers with "more meat for their money." But the pizza itself costs more, too: up to $5.55 from $5, an 11-percent increase.

Additionally, the brand says this pricing is for "a limited time," not taking off the table that the price could soon change further — though, later, Little Caesars also billed the meatier pie as "a permanent menu item change."

A 55-cent increase on a pizza that was already promoted as an amazing value may not seem like a huge deal, but it's actually significant for another reason: As the Detroit Free Press points out, it's the first national price increase the Hot-N-Ready pizza has had since its launch in 1997, nearly 25 years ago, though a Little Caesars' spokesperson told the paper prices have always varied by market.

But Little Caesars' chief marketing officer Jeff Klein simply tried to focus on the positives of the situation. "Change is good when it comes to giving our customers more of what they love," he said in the announcement, "and we're changing our iconic Hot-N-Ready Classic, adding 33-percent more savory, meaty pepperoni still at the country's most affordable price."

Little Caesars says they can claim that "most affordable" title by looking at the other three largest pizza chains' "comparable large, round standard cheese and pepperoni pizzas, sold at every day menu prices." So yes, even at $5.55, the pie is probably a bargain. Still, after they got rid of the whole two-for-one "Pizza! Pizza!" deal, it's no wonder loyal customers might be a bit nervous. 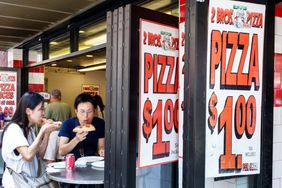 NYC's $1 Pizza Is No Longer a Dollar