The toy building blocks were used to create a potentially edible structure for future cultured steak.

Not that long ago, the idea of growing “real” meat in a lab and serving it as a replacement to farm-raised beef seemed like science fiction. Now, the question doesn’t appear to be if cultured meat will hit store shelves but when. And the science behind some of the innovations in the lab-grown meat movement isn’t “fiction” at all. In fact, new research from Penn State created a breakthrough using one of the most down-to-earth pieces of technology you could think of… Lego bricks.

For their study, recently published in the journal Food Hydrocolloids, food scientists from Penn State and the University of Alabama used ordinary Lego bricks to create a potential solution for improving the texture of cultured meat. In the process’s most basic form, when animal muscle cells are cultured to create meat, they grow without organization, leading the final product to look like ground beef. To take the form of a cut of meat like a steak, these cells need some sort of structural support — Penn State refers to it as a “scaffold” — to arrange them in a specific alignment. The researchers wanted to turn starch fibers into that scaffold, and in building the resulting electrospinning device to make that happen, they ended up digging into the toy box.

“The reason we chose Lego is we’re going to have water and ethanol in there and we don't want the device to be conductive,” explained Gregory Ziegler, professor and director of graduate studies at the Department of Food Science at Penn State. “The plastic was perfect.”

Though the scientists were mainly concerned with the complicated intricacies of how to create these starch fiber scaffolds, consumers will be much more interested in their potential application. “We've been able to align our scaffolding that could grow aligned muscle cells,” Ziegler continued. “A lot of scaffoldings that have been put out there for biomedical applications have synthetic plastic fibers. Who wants to eat plastic, right? Even if it's biodegradable, people don't want plastic in their meat. Here we have starch, and it just comes from corn. The idea is we could make a nice edible clean scaffold for our clean meat.”

But don’t expect Lego to continue to play a major role moving forward. The researchers say one of their next steps is to scale up their equipment to produce larger quantities of these starch scaffolds. It stands to reason that they won’t be buying a larger Lego set to help them do it. 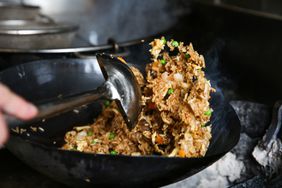