The bioengineer behind the brew is hoping to sell it commercially in the future.

Attempting to recreate the beers of yore is nothing new. Modern technology can analyze and isolate yeasts found on artifacts and use them to brew anew – leading to relatively recent examples like the revival of a 150-year-old lager in Cincinnati to more ancient resurrections like a 5,000-year-old yeast strain found on Egyptian pottery.

But a bioengineer in Ecuador is especially excited about his brewing renaissance, believing he's been able to reproduce Latin America's oldest beer.

Working with a splinter of wood from a 400-year-old oak barrel, the Catholic University of Ecuador's Javier Carvajal recovered a yeast strain he says was used by Jodoco Ricke, a Franciscan friar from Flanders, who first brewed beer in Quito in 1566 after introducing wheat and barley to the area from Europe, according to the AFP.

"Not only have we recovered a biological treasure but also the 400-year-old work of silent domestication of a yeast that probably came from a chicha [an indigenous fermented drink] and that had been collected from the local environment," Carvajal told the French news agency.

After learning about Ricke's brewery, Carvajal reportedly began searching for an ancient barrel to scour for yeast, eventually finding one in 2008 in the original convent/brewery, which is now a museum. From there, he had to work to essentially nurse the microbe back to health. "It is as if they were dormant, like dried seeds but having deteriorated over the years," he was quoted as saying. "So you have to reconstruct them, fluidize them, hydrate them and see if their vital signs return."

The final step for the brew was figuring out the proper ingredients for the yeast to ferment. "There were a massive number of holes in the recipe and my job was to fill those holes," he continued. "It is a work of beer archeology within the microbial archeology."

The resulting beer – which apparently offers notes of cinnamon, fig, clove, and sugarcane – has been brewed at home by Carvajal since 2018. He reportedly wants to sell it commercially, but was hindered by the pandemic and has yet to lock down an official release date. But hey, after waiting for 456 years, what's a couple more in the grand scheme of things? 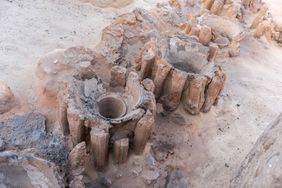 Archaeologists Have Uncovered the World's Oldest Industrial-Scale Brewery in Egypt