The Cosmopolitan heats up with Hattie B's Hot Chicken and much more.

Sometimes, the most powerful thing you can do in Las Vegas is not show your hand until you're ready to stun your opponents. So on Tuesday, The Cosmopolitan of Las Vegas surprised the Strip with the announcement of six new restaurants, including the first West Coast location of Nashville-based Hattie B's Hot Chicken.

Hattie B's will be one of six quick-service spots at The Cosmopolitan's new Block 16 Urban Eatery & Bar, which is scheduled to open early fall. The Cosmopolitan isn't calling Block 16 a food court or a food hall, but let's be clear: It feels like Vegas just ended the country's food hall wars. Hattie B's, a hot chicken mainstay with a heat level known as "Shut the Cluck Up!!!", should fit right in on the Strip.

What The Cosmopolitan has done is assemble an impressive collection of nationwide talent in the way that only a with-it Vegas resort can do. Yes, L.A. has the wonderful Grand Central Market food hall, and New York has nicely curated food halls like Gotham West Market. But they're all dominated by local talent, many of whom already had restaurants in those cities.

Vegas is able to consistently attract top-tier culinary players from all over the country because there are a lot of advantages for chefs who open in glitzy casinos. Having a restaurant in a Vegas resort means not worrying about curfews, permits, liquor licenses, or any negotiations with community boards. Striking the right Vegas deal means you don't have to fund buildout out of your own pocket. There's a consistent stream of hungry tourists. Plus, you always have a place to stay when you're in town.

Over the years, I've spoken to real estate developers all over America who've told me about their grand plans for a food hall. They've talked about how they want to open with world-class talent, to lure in multiple operators who've never been in their city and put them under one roof. This is much easier said than done. (One player to watch is chef/baker Chad Robertson, who will have Phoenix pizza legend Chris Bianco at the forthcoming Tartine Manufactory in downtown L.A. There have been long been rumors about Robertson bringing chefs from both coasts to his new projects in L.A..)

Las Vegas, which has a long track record of seducing the country's most prominent chefs, is the only place in America where something like this can happen again and again, where multiple properties can simultaneously add A-list culinary talent on the regular.

Vegas is the middle of a colossal dining makeover: There's the conversion of the Monte Carlo into Park MGM (with its forthcoming Roy Choi restaurant and Eataly) and a NoMad hotel. There's Palms adding star chefs like Michael Symon, Bobby Flay, and Marc Vetri. Ricardo Zarate's Once recently opened in the Grand Canal Shoppes at The Palazzo. Major Food Group's Sadelle's will open at Bellagio.

A lot of what's coming to Vegas are big, blockbuster restaurants. The Cosmopolitan, which recently announced Chinese restaurant Red Plate and is home to buzzworthy dining destinations like Momofuku, Jaleo, Milos, Blue Ribbon, Milk Bar, and Eggslut, is smart to bet on a collection of smaller, fast-casual restaurants at Block 16. These spots will individually and collectively generate a lot of attention without taking up a lot of real estate.

Quick-service dining is where a lot of the food industry is going. It's the preferred way to eat for a lot of young diners, but it also serves another purpose in Vegas: Many high-rollers like to eat in a hurry, so they can quickly go back to making big bets at the baccarat table. 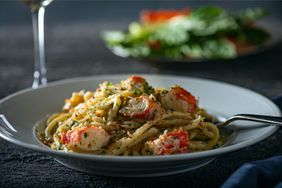 Las Vegas Restaurants Get Ready for a Summer Frenzy