Los Angeles Street Vendors Already Had It Tough. Then the Pandemic Hit

New regulations amid COVID-19 have hit LA's food vendors particularly hard. Many of them are undocumented immigrants and find themselves under more scrutiny than ever before.

Los Angeles’s dynamic street-food industry is fighting to survive. Street vending in the city has mostly ground to a halt during the coronavirus pandemic. Brick and mortar restaurants, faced with their own challenges, have received federal relief loans and an outdoor dining program that leaves out unlicensed street vendors. Businesses reopened last month, including bars and restaurants, but rising coronavirus rates have led officials to close them back down. Street vendors, many of whom are undocumented, meanwhile face roadblocks and police forcing them off the streets.

Juana Dominguez is a seasoned LA street food vendor. She got her start selling candies in local factories 25 years ago and has since become a fixture in the South Central neighborhood, vending Mexican food in front of the corner store she runs with her husband. She sells tacos, sopes, and huaraches, and prepares breakfast for neighbors who have come to depend on her for most of their meals each week. It’s been about ten years since she began vending there, and in that time she has had her equipment confiscated twice.

Dominguez choked up recounting the times health inspectors drove away with expensive equipment she worked so hard to get. “It’s devastating seeing your things taken away—so much effort, so much of what you fought for,” she said.

Those confiscations were before the decriminalization of street vending in 2017, a time when vendors faced fines and misdemeanor criminal charges and had their merchandise confiscated. For decades, vendors like Dominguez have faced hurdles in order to operate, and despite the legalization of sidewalk vending, vendors face new challenges during the pandemic.

Los Angeles street vendors drive a vibrant industry famous for bringing together food traditions of the city’s many migrant communities. But the permitting process for vendors is both onerous and expensive. LA requires street vendors to obtain a series of expensive permits. Food vendors must get a county health permit for a mobile food cart which can cost thousands of dollars, a sum many food vendors couldn't afford even before the pandemic hit. Unlicensed street vendors working during the pandemic can be fined $1,000 and charged with a misdemeanor, devastating penalties that increase the threat of deportation for vendors who are at the center of a fragile food economy.

“Street vendors have a right to work without being harassed in public.”

LA City Council passed an emergency motion to ban unlicensed street vending in March, to be enforced by the Los Angeles Police Department and the Bureau of Streets Services. “It’s not only that our streets aren’t as vibrant as they used to be,” said Rudy Espinoza, executive director of Inclusive Action, an economic development nonprofit that works with vendors. “The other issue is that there’s a lot of fear, especially from food vendors, that they will get this citation from the county health department.”

In addition to these hardships, street vendors have also been mostly shut out of economic relief packages. Federal stimulus payments excluded undocumented immigrants, which make up a large part of LA’s street vendor population. Initiatives from California Governor Gavin Newsom and LA Mayor Eric Garcetti to provide cash assistance to undocumented families have been met with overwhelming demand from LA residents, but many vendors are struggling to pay for basic necessities.

Dominguez stopped vending at the start of the pandemic. For two and a half months she depended on the revenue from their corner market, but it wasn’t enough to pay rent. She took out a small loan and purchased meat on credit to reopen her vending business for pick-up only a few weeks ago. They’ve installed a hand sanitizer dispenser, wear protective equipment like face masks, and guide clients to physically distance. She plans to take the reopening week by week. “It’s tough being a street vendor,” Dominguez said, “but it’s an honest job.”

Other vendors, like Mirna Cortez, are staying home. Cortez moved to Los Angeles from Sonsonate, El Salvador, 16 years ago and began working as a waitress and eventually as a cook at a restaurant where she mastered Salvadoran and Mexican recipes. The owner docked her wages for years, and so, as a mother of six, Cortez was forced to seek other work. She would eventually join her sister, a street vendor on a South Los Angeles intersection.

Cortez has worked as a street food vendor for six years serving up dishes like pupusas, caldo de gallina, menudo, and quesadillas. But because of the pandemic, Cortez hasn’t worked for months. With the exception of cash assistance from the nonprofit Inclusive Action for the City, her family has been shut out of most forms of financial relief.

“We work to get by day by day, to raise our children, to feed them, to pay rent, for the clothes on our backs, because it’s our job,” Cortez said. A misdemeanor citation and fine would deal a huge blow to her family. “They would be taking food out of my children's mouths,” she said.

In Los Angeles, street vending is rooted in rich cultural traditions. Cortez grew up helping her single mother sell everything from seafood to fruit and maize in El Salvador.

“We bring the traditions from our countries,” said Faustino Martinez, a cheerful South Los Angeles vendor that sells bolis, ice pops he first learned to make as a boy in his hometown of San Jacinto Chilateca, Oaxaca. After moving to the United States in 2003 and experiencing discrimination in restaurant and supermarket maintenance work, Martinez decided to transition into street vending to become his own boss.

Martinez has gotten by during the pandemic thanks to clients who have reached him by phone and Facebook to place orders from his pushcart business, Bolis El Oaxaco. It’s not quite the same as sidewalk vending, which he has cautiously begun to do. He jokes that he feels like a caged lion.

“Street vendors have a right to work without being harassed in public,” said Martinez, who’s also a vendor leader in the city. “We’ve taken one step back toward discrimination.”

Mario Ramos, a vendor who sells homemade ice cream on the weekends in LA’s Piñata District, a vibrant street food market,has exhausted most avenues in search of financial assistance.

In the early days of the pandemic he sold homemade face masks in order to pay rent, but it became less lucrative as competition grew. Ramos is back to selling nieve de garrafa, Mexican frozen treats, at the Piñata District.

Ramos joined other street vendors to lobby in Sacramento and led protests that won the legalization of street vending through the Senate Bill 946, signed by then Governor Jerry Brown in 2018.

“Jerry Brown freed us from the ugly word ‘criminals’ for selling on sidewalks. We won some respect from authorities no longer emboldened to intimidate us,” he said. “And then the pandemic happened.”

“Jerry Brown freed us from the ugly word ‘criminals’ for selling on sidewalks. We won some respect from authorities no longer emboldened to intimidate us,” he said, “and then the pandemic happened.”

Mayor Garcetti’s Al Fresco program was rolled out in May to facilitate outdoor dining at restaurants, and was expanded to include permitted street vendors, fewer than 50 in total. Last month, a city council member presented a $5 million funding motion to support street vendors.

Meanwhile, Ramos says his sales have plummeted by 70 percent. “We feel forgotten, we feel ignored. We will continue trying to support our family,” he said.

Maribel Garcia works as the economic development senior associate for Inclusive Action for the City which has provided cash assistance to street vendors, including $400 cash cards through the Street Vendor Emergency Fund.

“Our fear is that people won’t be able to survive this,” said Garcia. Street vendors’ loss of income threatens their ability to reinvest in their businesses and survive in the long run, and the current permit system is a huge roadblock. “It’s going to be really hard for food vendors because we don’t have a legal way for them to continue.”

For Dominguez, renewed policing intended to put a stop to unlicensed street vending has become a menacing presence that adds to the stressors of the pandemic.

“What I ask for most is tranquility,” she said. “When you hear that the inspectors are here, you’re on edge, you’re nervous, afraid that they’re going to take away everything you’ve worked so hard for.” 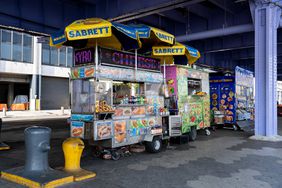