Experience: Joey is a writer, editor, TV/radio personality, lifestyle expert, former entertainment publicist, and author of Basic Bitchen. Prior to becoming a writer, Joey was a publicist at TLC. He was most recently editor-at-large of CBS Interactive's Chowhound where he managed the site's food and travel editorial content. Currently, he is owner and CEO of Beyond Basic LLC and a contributor to dozens of digital lifestyle brands. His work has appeared in People, Food & Wine, Travel + Leisure, Food52, Cosmopolitan, Apartment Therapy, and more.

Education: Joey has a bachelor of arts in communication studies from Northwestern University.

Seriously, Krispy Kreme? You really think you can just casually release Reese's doughnuts overseas without peanut butter-loving Americans getting a whiff of the news? The company was founded here for crying out loud. What is your reasoning? Where is your loyalty? Where is your PATRIOTISM?

In what can only be described as "the ultimate flavour indulgence" on Krispy Kreme Australia's website, the peanut butter cup-inspired doughnut boasts a peanut butter sauce filling with chocolate icing, peanut butter chips and vanilla biscuit crumbs. It is obviously finished with a light yet decadent chocolate drizzle, because why wouldn't the company go even more out of its way to make us feel jealous?

Though the doughnut is new to Australia, it looks like the flavor was first introduced to the UK in March 2015. So this basically means Krispy Kreme thinks we Americans can't have nice things. Sure, traditional glazed and their seasonal flavors are delicious, but we'll be third in line at best if the droolworthy dessert ever makes it to the good ol' USA. And that's a really big if.

No word on whether or not a stateside debut is in Krispy Kreme's playbook. In the meantime, doughnut/peanut butter cup lovers will just have to book plane tickets to Oz. 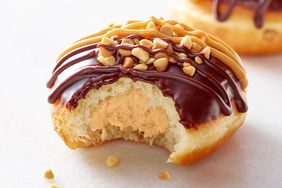 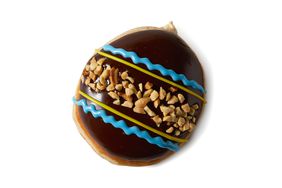