Plus, pizza and hot honey flavors are joining Van Leeuwen's lineup of ice creams coming to the freezer aisle.

At a time when everyone is in search of viral success, stunt products have become commonplace as big name brands seek to "break the internet." Recent examples include a Flamin' Hot version of Mountain Dew, a pumpkin spice variety of Cup Noodles, and, earlier this week, taco truck-inspired jelly bean flavors from Brach's.

With that in mind, the "crazy" idea that Kraft would team up with the Brooklyn-based creamery Van Leeuwen to create a Kraft Mac & Cheese Ice Cream isn't really that outside of the ordinary. But here's what is unexpected: The flavor was so good and so popular that it just received a nationwide launch at Walmart.

First, a quick recap. Kraft Mac & Cheese Ice Cream launched this past July, primarily as a promotional stunt by Kraft to honor National Macaroni & Cheese Day. But the initial 6,000 pints sold out in an hour, and the ice cream was lauded with praise as a genuinely enjoyable dessert. And so, by August, Van Leeuwen was back with a self-professed "lot more" pints to sell.

But clearly after that second round, demand was still high because this week, Van Leeuwen has announced a deal to bring seven of its flavors exclusively to Walmart stores in all 50 states — and lo and behold, Kraft Macaroni & Cheese Ice Cream leads the pack, meaning just like Kraft Mac & Cheese itself, the ice cream it inspired is now available for the masses.

"We knew Kraft Mac & Cheese would be a hit after tasting it, but we never expected it to be available in Walmart nationwide," Ben Van Leeuwen, co-founder and CEO of the namesake creamery, told me via email. "Before creating it, we saw how fascinated smaller artisanal food producers, particularly chefs and restaurants in the US, were with nostalgic American food culture. This is a play on that, and now consumers will have easy access to it across the country."

But if you still haven't tried this cheesy, pasta-less ice cream, don't necessarily sleep on heading to Walmart. These seven flavors — which also include Planet Earth, Pizza, Hot Honey, Royal Wedding Cake, Bourbon Cherries Jubilee, and Wild Blueberry Shortcake — will be part of a "10-week" rotation Van Leeuwen plans to "refresh" over the summer, meaning they still could only be around for a limited time.

But why Walmart? In the official announcement, Ben Van Leeuwen addressed that as well. "What inspired us to start making ice cream was the idea that good food, and good ice cream, made from good ingredients, should be widely available on the market," he said. "We made these seven exclusive flavors using the same artisanal processes and ingredients that we have been using to make our ice cream for the past 15 years. We have created a collection of classic flavors using thoughtfully sourced ingredients, from local jam makers to wild blueberries from Maine, to cookie bakers with a social mission."

Here's the official rundown on all seven flavors which includes additional oddities like pizza ice cream and another colorful variety that uses blue spirulina (with descriptions courtesy of Van Leeuwen):

* Planet Earth: This flavor is truly out of this world. Well, not technically because it's Planet Earth but, flavor-wise, it's otherworldly because of the blue spirulina almond ice cream and pieces of matcha green tea cake.

* Pizza: Put aside any notion that you can't have your pizza and ice cream together in one crazy, but crazy delicious, flavor. Delicious cream cheese and mozzarella ice cream with a tomato jam swirl and basil crust cookies!

* Royal Wedding Cake: Inspired by the cake served at a certain royal wedding in 2018, this is the closest you'll get (and they'll get) to feeling like a royal. Floral, sweet cream cheese ice cream with chunks of lemon sponge cake with layers of elderflower frosting.

* Bourbon Cherries Jubilee: Not a flame went near this sweet cream ice cream but we did blend in swirls of bourbon cherry compote so this flavor is still lit.

* Wild Blueberry Shortcake: There was no taming these wild blueberries, who were out late at night getting into trouble. We let them run wild before using them to create a swirl and then blending it into the vanilla ice cream and adding chunks of shortcake.

The above flavors begin rolling out at Walmart stores Nationwide on March 14. 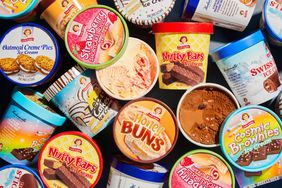 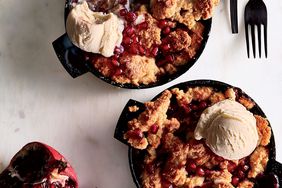 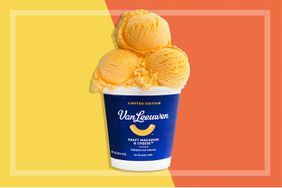