My nine-year-old palate went into shock on my first trip to India. my father's indian cooking was an occasional treat at home in belmont, massachusetts, but in his homeland, green chiles lurked everywhere, and even breakfast was full of fire. fortunately my father's sister, Aunty Kamala, was an excellent cook; she took my mind off cornflakes and hamburgers with her mouthwatering mild rice pancakes and coconut milk curries.

On that visit in 1975, my South Indian father, American mother, sister, brother and I spent two weeks in Kerala, the state at the southwestern tip of India where my father had grown up in a traditional Hindu family. We stayed in the town of Kottayam with Aunty Kamala in a large whitewashed house designed by my grandfather. It was set in a lush compound, dense with coconut palms, banana trees and bougainvilleas. I remember thinking it was the prettiest and the hottest place I'd ever been.

Kerala is on the Malabar Coast, with the Western Ghat mountains to the east. Monsoon rains from the Arabian Sea ensure a healthy crop of rice each year and fill the coconut-lined canals crisscrossing the countryside, which are alive with freshwater fish. The cooler hills to the east are blanketed with coffee and tea plantations, cardamom groves and black pepper vines.

The first two times I traveled to Kerala I was surprised by the food: it wasn't anything like the North Indian dishes I'd had in Indian restaurants at home. But it was only later, after I'd graduated from college and been cooking for myself, that I really paid attention to what I was being fed and how it was made.

It took a while to convince my aunt and her daughters that I was seriously interested in their cooking. I remember the first task I was given: frying the breakfast dosas, slightly sour lacy pancakes made from a fermented batter of ground rice and urad dhal (a kind of legume). To get the proper proportion of air bubbles, the cook must spoon the batter onto a hot griddle and immediately spread the batter thinly in a circular motion with the back of a ladle. The technique requires speed, accuracy and good wrist action, none of which I seemed to possess that morning. After my first few flops, which made the servants giggle, I got the hang of it, more or less.

Kerala's dosas are smaller, softer and thicker than the huge crispy ones of the neighboring state of Tamil Nadu. But in both places, dosas are accompanied by coconut chutney seasoned with curry leaves and mustard seeds, as well as sambar, a fragrant stew of vegetables and yellow dhal, flavored with tamarind, fenugreek and asafetida. If you're under 10 years old, you can skip these spicy condiments and eat yours with sugar, as I did.

Coconut, in all its forms, is the backbone of Keralan cuisine: the meat is grated and ground with spices into pastes that flavor curries, the milk is added to enrich sauces and the fragrant oil is used for frying. (By contrast, North Indian cooks rely on cream and ghee, or clarified butter, for richness.) Perhaps the quintessential coconut dish of Kerala is thoren, a homey vegetable stir-fry with shredded fresh coconut and crunchy bits of mustard seeds. A version with cabbage was one of the first curries I learned from my father.

The milk squeezed from coconut gives a creamy consistency and mellows spices. Sothy, a Sri Lankan dish my grandmother learned to make from friends in Malaysia, is a curry that is essentially pure coconut milk flavored with regional seasonings: fresh curry leaves (a pungent herb that's not related to curry powder and tastes like a cross between green bell peppers and lime leaves), mustard seeds, turmeric, dried red chiles and fresh green chiles. Soupy curries like this one are common throughout South India and Sri Lanka, where they are spooned over porous rice pancakes, piles of rice or, as with sothy, served over homemade rice noodles called iddyappam--quite a change from the chunky curries of North India, which are scooped up with a piece of flat bread.

South Indians are great rice eaters, not surprising in a land of rice paddies. Unlike the delicate dry basmati rice eaten in the north, southern varieties have plump grains that are good for grinding into dosa batter and soaking up curries. Boiled rice served with dhal and three to five curries is called a rice meal and traditionally is served on a banana leaf. Today large stainless steel plates usually replace the leaves.

As is traditional in India, my relatives eat with their right hands, and it's considered poor manners to drop any rice. When my father was a boy visiting some very proper relatives, he was so mortified at dropping a few grains that he hid them in his pocket. The family has never stopped teasing him about it. When I was young and still a beginner at eating with my hand, my father would mold a mixture of rice, dhal and curry into bite-size balls and set them on my plate so I could pop them in my mouth one at a time.

Now when I visit Kerala, I'm comfortable eating with my hand and consuming hot chiles at every meal. And I know I can go into my aunty's kitchen and feel entirely at home.

Maya Kaimal is the author of Curried Flavors (Abbeville) and the photo editor of Good Housekeeping magazine. 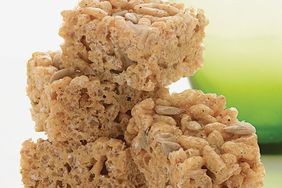 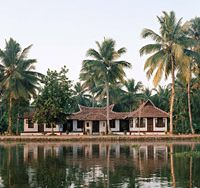 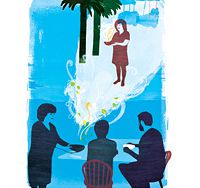 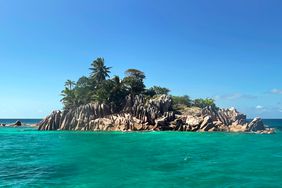