The chef had initially pulled out of a deal to open a restaurant in the landmark building while it was being leased by the Trump Organization.

It has been a big month for the Old Post Office building in Washington, D.C. The historic landmark has officially reopened as a luxe Waldorf Astoria hotel, and its clock tower — complete with an incredible 360-degree view of the city — is welcoming visitors for the first time since we all added phrases like "social distancing" and "contact tracing" to our vocabularies.

In a statement, Andrés' ThinkFoodGroup (TFG) announced that the restaurant will be the newest outpost of his Bazaar concept, which has existing and upcoming locations in Chicago, Las Vegas, Los Angeles, and New York. The Bazaar website describes it as "a carefully curated theater of shared plates" with "ingeniously innovative cuisine" and "thoughtfully created cocktails."

"A lifelong learner with a passion for US history, the opportunity for José and our team to open a flagship restaurant at this iconic site is incredibly meaningful," Sam Bakhshandehpour, the president of ThinkFoodGroup, said. "Bringing the Bazaar to DC is an important anchor for us, and our partners, who are locally-based and community-minded."

Andrés had previously planned to open a restaurant in the Old Post Office in 2015, shortly after the rights to the building were acquired by then-presidential hopeful Donald Trump. According to the Washington Post, the $7 million restaurant, which was to be called Topo Atrio, would've been part of the Trump Organization's $212 million renovation of the Old Post Office into the Trump International Hotel.

But in June 2015, when Trump used inflammatory language to describe Mexican immigrants, Andrés pulled out of the deal. "Donald Trump's recent statements disparaging immigrants make it impossible for my company and I to move forward," DCist quoted Andrés as saying at the time. "More than half of my team is Hispanic, as are many of our guests. And, as a proud Spanish immigrant and recently naturalized American citizen myself, I believe that every human being deserves respect, regardless of immigration status."

The Trump Organization sued Andrés for lost rent, and Andrés counter-sued for $8 million. The two parties came to a settlement in 2017, and chef David Burke ultimately opened a BLT Prime restaurant in the space that would've been occupied by Topo Atrio. The Trump Organization sold its lease on the property to Miami investment firm CGI Merchant Group in May of this year; CGI has since partnered with Hilton Hotels to operate it under the Waldorf Astoria name.

Andrés seems to have moved past that particular disagreement, and is looking ahead toward his new Bazaar, telling the Washington Post, "Without a doubt, wherever I open a restaurant, everyone will be welcome." 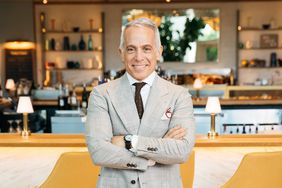