The updated James B. Beam destination will offer education, tastings, restaurant dining, and the chance to fill your own cask.

Whiskey tourism is big business in Kentucky these days. In 2019, the Bluegrass State greeted upwards of 1.7 million visitors to its iconic Bourbon Trail. Associated annual revenue for the local economy totaled in the billions. Everything from food and beverage to retail and lodging is bolstered by way of the main attraction: the distillery. Traditionally these were nothing more than industrial workhorses, ceaselessly laying down liquid into charred oak casks. Now there's an arms race amongst them to lure guests with the most immersive, modernized experiences imaginable. And this month, Jim Beam distiller JBBDCo. becomes the latest to launch. In a Food & Wine exclusive, the world's biggest bourbon maker reveals the details of its eagerly anticipated James B. Beam visitor experience, opening in Clermont this fall.

The unveiling marks the culmination of nearly 18 months worth of pandemic-era construction. "It took only 120 days to rebuild our distillery after Prohibition back in 1934," notes 7th generation master distiller Fred Noe. "This is our largest renovation since then and it's intended to be an extension of our home. It's not just a chance to visit, it's a chance to become part of our family."

Visitors will be received at the renovated campus by way of the American Outpost: a bright white multistoried edifice serving as reception for tours and a hub for bourbon tasting and education. With its corrugated tin facade, the building is meant to echo the look and feel of the massive rickhouses used to age some 17 million barrels of bourbon on this site since 1935.

The updated tour features an "interactive" column still, which will afford visitors a transparent look into how distillation occurs on-site. They will walk past a replica of a 1939 Cadillac, the exact vintage that Jim Beam drove to and from the distillery in the years after its rebirth. It's a physical stand-in for the care he provided his proprietary yeast strain, which he allegedly kept on his persons during those drives — the same heritage yeast safeguarded by the distillery today.

In the Casehouse, visitors will be taken through a six-stage, multi-sensory exercise highlighting how three marque brands are distilled and matured differently to develop their own distinct character and flavors. Fans will also have the opportunity to fill their own barrel here, writing a personal message on the cask before it heads to the rackhouse for multi-year maturation.

On an adjacent footprint rises the all-new Fred B. Noe Distillery, a sleek and modern production facility named after the brand's contemporary steward. This space, equipped with its own tasting room and sensory lab, is where Beam will roll out most of its small-batch whiskies as well as future innovations. It's also where the next generation takes the reins, as Fred hands the keys to his son Freddie Noe, eighth generation Beam Family distiller.

"We've scaled back our size here [compared to the main distillery] to be able to do some more research on bourbon making and more exploration into American Whiskey," says the junior Noe. "Also, we will be producing Booker's and Baker's in this facility, with liquids going into Little Book, as well."

A signature highlight of the revamped site is Kitchen Table: a full-service bar and restaurant built into the Beam family's former personal dining hall. Crafting the menu here is acclaimed chef Brian Landry of Jack Rose in New Orleans. Dishes and techniques will incorporate flavors inherent to the bourbon-making process, including fire, smoke, char, oak, and spice.

"One of the first things you'll notice when you walk in the restaurant is the size of the bar," says Landry. "With 30 seats surrounding it, guests will be able to enjoy the entire portfolio of bourbon made on campus while also finding a full menu of dishes that complement the whiskeys."

Landry also worked with the bar staff to assemble a cocktail menu that follows his philosophy for pairing whiskey drinks with the fare. "I approach pairing whiskey with food much like I approach pairing wine with food," he explains. "The effervescence of a classic highball of Jim Beam and soda is light and refreshing and a great way to start a meal. When I crave the brightness of citrus or ginger, I will typically make a whiskey smash or a Kentucky mule. Alternatively, if I want a booze-forward cocktail to stand up to a dish with heavy smoke or char, I reach for a Manhattan."

All of it is getting mixed behind the stick. And all of it finds recommended food pairing from a list of staples, including a classic country ham. Expect that pork preparation to play prominently on the menu, as it has been a Beam family favorite — along with beaten biscuits — for generations. Seafood standouts abound as well, such as hot smoked trout and southern fried catfish. Pizza will arrive fresh out of a wood-fired oven.

Just outside the dining hall is a wraparound porch where visitors can lounge leisurely on rocking chairs, sipping and snacking their way through an afternoon in Bluegrass Country. "It's a really beautiful view," says Noe, who spent much of his youth here, admiring this particular vantage point. "It overlooks a couple of our rackhouses, and then off in the distance you see the Bernheim Arboretum Forest. It's the watershed for all our whiskey."

And it's a watershed moment for the Beam brand. Despite 225 years of family history to draw from, JBBDCo. feels more dedicated to the future with its sizable investment into what bourbon has become: Not just a drink, but a destination. Confirms the senior Noe, "this homestead marks the start of a new era for us." 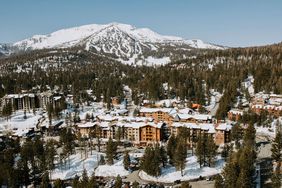 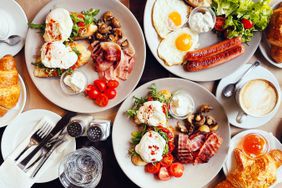