Zero Foodprint also received the Humanitarian of the Year Award.

Although the "America's Classic" winners and semifinalist nominations have already been announced, James Beard Award season is just getting started. Today, the foundation announced the recipients of the Lifetime Achievement Award and Humanitarian of the Year Award.

The former recognizes someone in the industry whose work has had a positive, lasting impact on "the way we eat, cook, and think about food in America." This year, it was awarded to Jessica B. Harris, the celebrated culinary historian and cookbook author who specializes in the food of Africa and its diaspora. Harris is the second African-American woman to receive the Lifetime Achievement Award, following the late legendary New Orleans chef Leah Chase. In a statement, she said she was humbled and honored to receive the distinction.

"I am mindful that while my name is on it, it is also meant for those African Americans in the hospitality world in the past who labored unheralded, un-thanked, and for too many centuries unpaid or underpaid," she continued. "I hope that this extraordinary honor heralds the beginning of a new era when all Americans can sit down and fully participate at the nation's table and none of us are strangers at the feast."

Harris also curated our Original Innovators package from our February 2020 issue, which honors the legacy of Black cooks shaping American cuisine for over 400 years. Inside, you'll find a collection of essays and recipes that highlight "seven ingredients essential to the African American experience," from oysters to sweet potatoes.

The Humanitarian of the Year Award, on the other hand, recognizes an individual or organization "whose work in the realm of food has improved the lives of others and benefited society at large." The 2020 award went to Zero Foodprint, a nonprofit that partners with restaurants to crowd-fund grants that allow farmers to make the switch to renewable farming. The organization is also the first Humanitarian of the Year to receive a cash prize of $20,000, which will be awarded annually to winners through the Michael Phillips Humanitarian Fund.

"We're so excited to see the James Beard Foundation shining a spotlight on food and climate, because farmers are amazing, and the restaurant world can do so much to heal the world," Zero Foodprint's executive director, Karen Leibowitz, said in a statement.

Next up in the James Beard Award schedule, you can expect the finalists for the chef, restaurant, and media awards to be announced on March 25. Then, the media awards winners will be announced on April 24, per the foundation's website, with the leadership awards scheduled on May 3. The annual gala celebrating the winners will take place on May 4 in Chicago. Stay tuned for our continuing coverage. 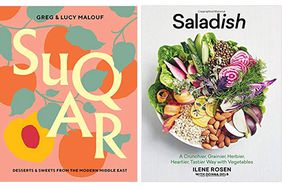