Working on a rickety picnic table in a rustic open-air kitchen, star chef Jean-Georges Vongerichten creates a sensational New Year's Day meal for his family and a few close friends to eat under the palms.

It's conceivable that St. Bart's is relaxing at low season. From the porch of the average hillside villa, the island offers peaceful views of the flat, blue bowl of the Caribbean Sea, where rocky outcroppings stand sentinel over the anses, the bays where French buccaneers once hid between pirating excursions. Papery coconut palms rustle in the slightly humid breeze. The only sound to puncture the stillness—aside from the occasional rooster crowing—comes from the capital of Gustavia, where you can hear the idling engines of a few yachts.

But at high season, make that dozens of yachts. From Christmas to New Year's, St. Bart's goes a little bananas. Whether they arrive by boat or plane, those lucky enough to own a villa or score a hotel room here don't exactly take it easy. Upon landing, they clamber into jeeps and take the curves of the narrow roads at breakneck speed to get down to the business of serious fun as quickly as possible. The preferred car on the island is a roofless 4x4, not because the roads are treacherous, but because four-wheel drive is essential for backing out of twisting driveways when you turn down the wrong ones, repeatedly, looking for your cliffside cottage in the dark after a full night of dancing.

In the morning light of January 1, however, on a snug compound in the friendly village of Lorient, a few islanders relax like pros. In a primitive, open-air kitchen with a rickety picnic table for an island counter, a plastic washtub holds several crawling spiny lobsters. A china plate keeps a dozen avocados from rolling onto the floor. A pitcher of spicy Bloody Marys stands at the bar, along with several glasses of rum- and lime-spiked Orangina. This place could belong to Jimmy Buffett—but then, he has a house of his own just down the road.

Star chef Jean-Georges Vongerichten and his business partner, Phil Suarez, know how to take a vacation. Phil and his wife, Lucy, bought this 1.5-acre palm-ceilinged beachfront property soon after they started coming to the island in the late 1970s. Back then, a few locals still navigated the roads by donkey, and Phil was still producing the "Great Taste, Less Filling" advertisements for Miller Lite.

In 1991, Phil went into the restaurant business with Jean-Georges, backing him in one of his first Manhattan ventures, JoJo. Since then, the two have opened 22 establishments together, and have become incredibly close. For two weeks every winter, they vacation together on St. Bart's. Jean-Georges and his wife, Marja, rent a house up the road from the Suarezes with their daughter, Chloe, now eight years old. Over the years, they've formed friendships with other New Yorkers who regularly spend time on the island, long-timers like fashion photographer Patrick Demarchelier and his wife, Mia, and real estate adviser Ben Lambert. Today Jean-Georges wants to make a feast for them all, to celebrate the new year and stretch out his last few days on the island.

These are the only two weeks the chef takes off all year. The rest of the time, he puts in several shifts a week at his flagship restaurant, Jean-Georges, in Manhattan, between hops to oversee his ever-expanding international empire. Back in New York City in early December, he looked pale and hunched. Now, on St. Bart's, he leans against Phil's kitchen counter like a bronzed Steve McQueen eased up against his Mustang — and this on only a few hours' sleep.

As they do every year, the couples started New Year's Eve with Champagne and caviar at Phil's. Then they dined at Maya's Restaurant, their favorite place on the island, which serves French-Creole-influenced food; it would be an impossible reservation were the place not run by their old friends Maya and Randy Gurley. After dinner, they coasted down to La Plage restaurant on St. Jean beach, where Jean-Georges, Marja and some friends stayed up until 7 a.m. "We danced with our feet in the water," Jean-Georges says, winking at his wife. "It was a lot of fun but not a lot of food. This meal will wake everyone up."

For the first course, a lobster-noodle salad with chile-honey dressing, the chef has set two pots of seawater on the stove to cook sweet, local spiny lobsters. He's marinated two pork rib roasts in a salty-sweet mixture of soy sauce and dark maple syrup. For dessert, he's asked Maya to bring one of his favorites, her locally famous coconut custard tart.

As Jean-Georges gets to work on the meal, he enlists everyone's help. Marja's cousin James, who has vacationed with the Vongerichtens for a few years now, marvels at Jean-Georges's way of relaxing. "He yells at the people on the beach," James recounts. "He says to them, 'Why are you lying on the beach when the water is out there?' "

"It's a valid question," Jean-Georges says, lowering a lobster into the pot. "I don't see the point in lying still. I do everything on the beach—paddleball, surfing, catamaraning. I'm a Pisces; I feel at home in the water."

The chef tears off the tail of the first cooked lobster. The juices puddle on his cutting board. "Smell that," he says, holding the tail out for Lucy. "That's the ocean."

Jean-Georges and his deputy, Daniel Del Vecchio, set to shelling the lobsters while the others chat. Lucy describes how two iguanas have just nested on the property and snack on the hibiscus blossoms. St. Bart's is wilder than one might expect: Roosters strut in parking lots and stray cats brush against customers' ankles at even the nicest restaurants. "The people here are pirates," Jean-Georges says as he moves into the yard to start grilling the pork. "I love it."

"J, what the hell are you doing?" Phil shouts. Jean-Georges has grabbed one of Phil's cheaper serrated knives to saw off a tree branch dangling close to the grill.

"You're destroying my property!" Phil growls.

Jean-Georges grins, reaches up and yanks off the limb.

Phil retrieves the wine he's chilled for the first courses, a 2006 Commanderie de la Bargemone rosé. "Domaine Ott is the favorite down here," he says. "But this is lighter, better for J's spicy food. Right, Maya—J's food is too spicy?"

Maya has just arrived and sails into the kitchen, securing her frizz of red hair with her sunglasses as she kisses Jean-Georges on both cheeks. He mutters defensively, "C'est tout-a-fait simple, tu vois?"—it's a simple, humble meal. She smiles in disbelief, and reaches to taste the dressing he's prepared for the lobster salad: a blend of charred red pepper and chile pepper subtly sweetened with velvety elderflower cordial and honey.

Maya takes a taste and suddenly exclaims in English, "Wow, that's got some zap!" She watches admiringly as Jean-Georges cuts slivers of herbs for a garnish. "I love his precision," she says. "The herbs taste much clearer when they're chopped with a sharp knife like that."

The remaining guests stroll in. Patrick hugs Jean-Georges, while Ben and his wife, Linda, head to the bar to greet Lucy. Everyone's wearing sandals or flip-flops, and as if St. Bart's were Wimbledon, they're all dressed in white. The music switches from samba to Charles Mingus's "Stormy Weather," but there are no clouds in sight.

As the group sits down at a table under the palms, the chef brings out the lobster salad and a second salad of sweet mango and juicy tomato dressed with a bright red wine vinaigrette. "This is Maya's," he says, "with a twist." The regulars recognize it immediately as one of her restaurant's signature dishes. Patrick takes a forkful along with a sip of Carib Lager. "I love the tomato and mango together," he says. "That tastes so good."

"Patrick knows his food," Phil says. "But I wouldn't let him take my picture. He's too young. He doesn't know what he's doing." Patrick gives Phil a look. The two have shared Knicks tickets together for years; the games have clearly given them time to fine-tune their repartee.

Jean-Georges pays them no mind, continuing his traverses from the grill to the table, bringing out the main course, his slow-grilled pork on a bed of green beans and braised onions in a spice broth with star anise. The caramelly scents of anise and maple flit through the palms.

There's still dessert: Maya's coconut custard tart, resembling a giant macaroon with its crunchy, sweet toasted-coconut topping. Jean-Georges serves it with an improvised fruit salad of passion fruit, bananas, kiwis and prunes from the grocery store. Chloe scoops out vanilla ice cream and Jean-Georges shows her how to garnish it with a little white pepper from a small disposable grinder.

After cleaning up the kitchen, emptying the trash and, yes, sitting still on a deck chair for almost a full hour, Jean-Georges announces that it's time for a swim. The Suarezes stay behind, but the rest of the group heads to his favorite beach, Grande Saline. Marja and Chloe stretch out on the sand; Jean-Georges darts into the pearlescent water. James saunters down to join him in the surf.

A big wave rolls in. "Let's catch it!" Jean-Georges yells to James. Though no one has declared it a contest, they vie to see who can ride it farthest, fastest. When the wave breaks, James stands to look for the chef. At first, he's nowhere to be seen. But then, at the farthest edge of the water, from beneath the thick froth closest to the sand, his black hair emerges. Jean-Georges stands up and smiles. If this was a competition, he's won it by a good 30 feet.

"That was great!" he says, laughing, and runs to kiss his wife and daughter. James walks up to join them, but before he's even made it to the towels, the Pisces has darted back toward the sea. As Jean-Georges scoots past a small boy making a sand castle, he calls out over his shoulder, "What are you doing on the beach? The water is out there!" 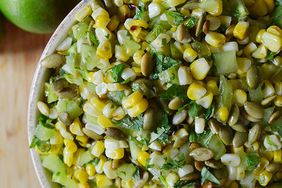 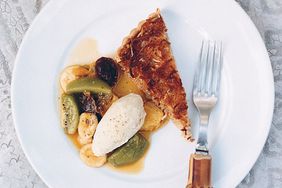 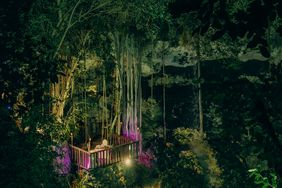 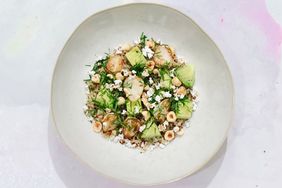 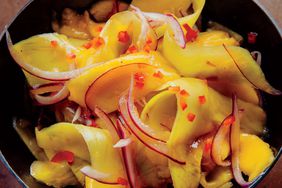