Last week, you could probably hear all of Spain inhale sharply before they shook their heads about an absolutely devastating political scandal. On Friday, Prime Minister Pedro Sánchez spoke at a livestock fair in the western part of the country when—and you might want to take a seat for this—when he got two of Spain's most prized kinds of ham confused.

"[Y]ou can be sure that when the Chinese president visited Spain he would have been served a plate of jamón serrano from Extremadura," Sánchez said, and although it might be true that farmers on the Iberian peninsula welcome their guests with cured meats, it sure as heck wouldn't have been jamón serrano: Extremadura is well known for its jamón ibérico.

"We couldn't hope for a better advertising campaign, and a free one, at that, Ángel García Blanco, the president of the farmers' association, told The Guardian. "As soon as I heard him utter this drivel, I thought: we have to make the most of this." The association has reportedly sent some of its members to Madrid, to give Sánchez a crash-course on ham and its origins.

High-quality pork is serious business in Spain—the country produces some 40 million hams every year. But what's the difference between one jamón and another? First, don't ask that question in Spain. Next, there are a number of variations between the two, including the breed and color of the pig, the animals' diets, the length of the curing process, and the region where the ham is produced.

What is jamón serrano?

According to the ham importers at Jamon.com, jamón serrano literally means "mountain country ham." It's made from white pigs—either the Duroc, Pietrain or Landrace varieties—that are raised on cereal grains. The meat is salted for up to two days, rinsed, and then cured for anywhere between a year and eighteen months. Serrano is the most commonly produced ham in Spain, accounting for a whopping 90% of its annual production.

What is jamón ibérico?

The more exacting jamón ibérico must be made from black ibérico pigs, or black ibérico pigs that have been cross-bred with another breed of pig, but the resulting porker still has to be at least 75 percent ibérico. (And if the jamón on the ham stand has a black hoof attached, that's a sure sign it's an Ibérico.) Jamón ibérico has been called "some of the best cured meat in the entire world," but the best of the best is Jamón ibérico de bellota, which comes from free-range, acorn-eating black Ibérico pigs. (Bellotta means 'acorn'). It's also ridiculously expensive: a single ham can cost more than $2,000.

Jamón ibérico also has a lengthier salting period than jamón serrano, and it is cured for between two and four years.

There aren't any geographic restrictions for the production of jamón serrano—although it does have to be made in Spain—while jamón ibérico has a designation of origin which restricts its production to four regions in western and southwestern Spain. Yes, Extremadura is one of those regions.

Hopefully, the Prime Minister has figured that out by now. 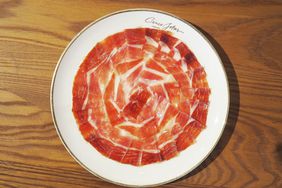 How to Buy Jamón Ibérico: What to Look for and Where to Get It