The 18-stall food hall is slated to open at Pier 57, which had previously been discussed as the site for Bourdain Market.

The James Beard Foundation — notably known for its annual culinary awards — already works with many of America's best chefs. Soon, you'll be able to find as many as 18 of them under one roof.

The New York City-based nonprofit will be both headlining and helping to curate a food hall in the city's Chelsea neighborhood. JBF will choose vendors alongside the management firm Jamestown — which, among its many projects, already operates the Chelsea Market — with the stated goal of serving "as an incubator for local small businesses and food entrepreneurs aligned with the Foundation's mission of championing a standard of good food anchored in talent, equity, and sustainability."

Scheduled to open this fall, the still-unnamed project will be housed at Pier 57, the now-Google-controlled riverside location that was once a potential home for Anthony Bourdain's proposed food market.

The James Beard Foundation's CEO Clare Reichenbach told Eater that the plan is for the 18-stall, 16,000-square-foot hall to showcase "the rich culinary and cultural diversity of New York City" by leveraging the organization's vast culinary network. "The center of gravity is absolutely New York City," Reichenbach continued. "This is a space to serve the local community."

One of the stalls will be controlled by the Foundation itself, featuring what is billed as "a mission-centered showcase kitchen, dining and demonstration space, and vendor kiosk" that will offer regularly-changing "new chef-driven, fast-casual concepts selected by the James Beard Foundation." Added Reichenbach, "It's just a great way to bring to life what the foundation stands for."

The rest of the vendors have yet to be chosen.

The food hall will be a first for the James Beard Foundation, and since taking over the reins as CEO back in 2018, Reichenbach has made getting the organization out of its comfort zone a major part of her tenure, with a specific focus on making the group and its awards more inclusive. She told Eater that the selection of vendors will also have an eye toward gender and racial equity. 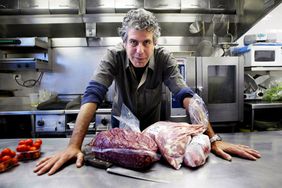