Sold in both "hot" and "sweet" options, the deep dish pies are available nationwide through Lou Malnati's online shop Tastes of Chicago.

The success of The Bear has put a renewed focus on the chaos of kitchen culture. But the TV show has also generated increased interest in the food its fictional restaurant serves, namely Chicago-style Italian beef. Of course, as one of America's top culinary destinations, Chicago has plenty of other local specialities — and now, two of the city's most iconic names have teamed up to create a dish combining two iconic Chicago menu items: a Lou Malnati's x Portillo's Italian Beef Deep Dish Pizza.

Lou Malnati's — which boasts over 50 locations around the Chicago area and beyond — has been making deep dish pizzas in the city since 1971. Meanwhile, Portillo's — which is arguably better known for its hot dogs than its beef — opened its first restaurant in the Chicago area in 1963 and now has over 60 locations nationwide. Despite all that combined history, however, the two brands say this marks the first time they've ever worked together, resulting in an "epic collab that's almost too Chicago (is there such a thing?)."

Available for a limited time only, and exclusively for nationwide shipping via the website Tastes of Chicago, the Lou Malnati's x Portillo's Italian Beef Deep Dish Pizza is built to be cooked at home and sold in both a "Hot" (with hot giardiniera) or "Sweet" (with sweet peppers) style in a variety of packages.

And what if you don't want the pizzas shipped? Well, too bad. Tastes of Chicago — which is run by Lou Malnati's — clarifies that these pies will only be sold through the website and aren't available in Lou's restaurants or Portillo's restaurants. It's almost as if this Chicago deal unintentionally comes with a bit of The Wieners Circle's attitude. 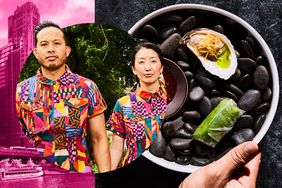