Is Whiskey Evaporation Bad for the Environment? A Scottish Politician Wants to Know

Two percent of ethanol evaporates during Scotch production — but we rarely ask where the "angels' share" really goes.

Climate change is a growing threat to humanity, and the food and beverage industry certainly shares part of the blame. Agricultural machinery adds to carbon dioxide emissions. Cattle are a large source of methane. And when making Scotch, ethanol evaporates into the atmosphere which… Wait, is that bad? One member of the Scottish parliament wants to know.

The "angels' share" is a well-known phenomenon in whiskey production: Alcohol evaporates even more readily than water, and so when producing Scotch, inevitably, some of that booze evaporates out of the barrel, which is humorously known as the "angels' share." But is this evaporating ethanol problematic? Ross Greer, a Scottish Green Party Member of Scottish Parliament, has asked for his government's stance, according to The Courier.

"I was recently contacted by a constituent with a background in industrial chemistry. He has been working with a number of distilleries on issues such as maturation loss and was interested in the Scottish Government's position on the issue," Greer was quoted as saying. "There's a real lack of data in this area and little clarity from government on what is expected, so I was happy to lodge some questions with ministers and clear things up. I hope the responses so far have proven useful to those across the whisky industry who are working hard to reduce emissions and protect the reputation of Scotland's national drink."

In commenting on the story to The Courier, the Scotch Whisky Association maintained that ethanol evaporation doesn't pose any problems. "Losses of ethanol average around 2 percent per year and, as the Scottish Government points out, is neither harmful to health nor impactful on the environment due to its rapid dispersal," a spokesperson told the paper. "[The Scotch Whisky sector] works hard to reduce emissions across the board, including a 32 percent reduction in greenhouse gases since 2009."

Additionally, Mairi McAllan — Scotland's Minister for Environment, Biodiversity and Land Reform — was quoted as saying that she believed ethanol evaporation is harmless. "The main release to air from Scotch whisky maturation is the fugitive emission of ethanol, which disperses very quickly in the atmosphere and is not considered to be harmful to human health through this exposure route," she stated. "While emissions from maturation of Scotch whisky are not subject to regulation under the Pollution Prevention and Control (Scotland) Regulations 2012, SEPA works with regulated business through sector plans to help drive improvement and reduce emissions across environmental media."

Still, the science is abundantly clear on one thing: This share is almost certainly not going to any angels. 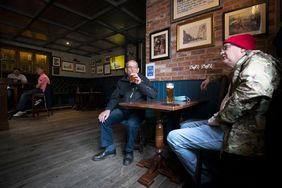