Local records show a brewery was in operation at the location since at least the 1860s.

A team of Iowa utility workers had a more exciting-than-usual day at work recently, when some underground electrical work revealed a well-preserved "beer cave" from the mid-19th century. According to KCCI, the electrical workers from the city of Winterset were doing some excavation on a project in Madison County — yes, as in The Bridges of — when they ran into the underground structure.

"They started digging it up and figured they hit a rock shelf," electrical superintendent Chuck Johnson told the outlet. "When we poked our head in and saw the arched ceiling — there isn't a flaw in it. It's just like it was brand new."

An 1869 business directory suggests that the cellar was located near a brewery that was already operating in the area. And, just like the beer caves at your local convenience store, the underground cellar could've been used to keep brews cold in the days before we all had refrigerators.

"Iowa DOT staff, with City of Winterset Utilities and the Madison County Historic Preservation Commission, took a preliminary look at the location in early July," a Facebook post from Madison County Historic Preservation read. "The cellar, since it is below ground to be cool, now holds water. Those involved plan to regroup in the fall when the water table is lower, so that LIDAR (light detecting and ranging) equipment can be used to fully assess the structure from the inside."

According to a second Facebook post from the Madison County Historical Society, researchers are already digging in — no pun intended — to the history of both the cellar and its potential owners. "Any time you find something from the 1860s, it's really exciting," Jared McDonald, the director of the Madison County Historical Complex, told WCCI. "We'll do something, either a marker or — I don't if we'll exhume it and have tours of it, but we'll definitely have a mark and a plaque for it."

The idea that the cellar could become a tourist destination isn't too far-fetched. In 2018, an Easton, Pennsylvania man started excavating a beer cave that was once used by the Kuebler Brewery. Terry Briggs told Lehigh Valley Live that the entrance to the cave had been covered when the brewery closed in the 1950s, and he spent over a year clearing out the cave, which stretches more than 80 feet into the hillside.

"I just can't get over that men did this," he told the outlet last year. "And back then when they did it, there weren't any big backhoes. I don't know how they did it." Briggs says the cave stays a crisp 52 degrees every season, and he plans to build an eight-story, 108-room hotel on the property. He also hopes to turn the underground cellar into a restaurant and bar and has proposed partnering with a local winery. There's obviously plenty of storage down there. 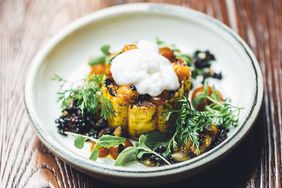