An Illegal Winery Was Found in a Sewage Plant in Alabama

Authorities called it one of the largest illegal wine production operations they’ve ever seen.

In prison, illegally produced alcohol is sometimes referred to as "toilet wine." But in Alabama, authorities found an illegal winemaking operation so large, it needed an entire sewage plant.

Last Thursday, the DeKalb County Sheriff's Office raided the Rainsville Wastewater Treatment Plant in Rainsville, Alabama, after receiving an anonymous tip about illegal winemaking, according to WHNT News 19. Authorities stated they found a large wine production operation that appeared to have been in use for quite some time, housed in a little-frequented part of the facility.

Photo images provided by the news site showed over a dozen large jugs containing mostly red liquid, as well as plenty of fermentation buckets and other winemaking equipment. No official numbers were given on the size of the operation, but based on a quick assessment of these photos, they would appear to show that at least 300 bottles worth of wine were in clear fermentation vessels.

By Friday, Allen Maurice Stiefel, a 62-year-old supervisor who had worked for the city for about 15 years, was charged with unlawful possession of an illegally manufactured alcoholic beverage and use of official position for personal gain—a misdemeanor and felony charge, respectively—according to a followup from WHNT. Reportedly, Stiefel, who had no previous issues until being suspended without pay after his arrest, was one of just four employees at the plant, with Rainsville Mayor Rodger Lingerfelt stating that he didn't expect anyone else to be suspended.

"I want to thank the mayor for his cooperation and willingness to allow law enforcement to do our job and shut something like this down," DeKalb County Sheriff Nick Welden was quoted as saying. "This is definitely one of the biggest operations we've seen in our county and possibly our state. A big thanks to the public and their tips against ALL illegal activities. Once again, it doesn't matter who you are, no one is above the law. We won't tolerate anyone using their position to hide their illegal actions at the taxpayer's expense."

As for the wine itself, The Gadsden Times reports that, no, wastewater and wastewater treatment equipment were not being used to make the booze; the two operations were apparently completely separate. That said, even with the finest water and the best equipment, how good can wine made in an Alabama sewage treatment plant really be? 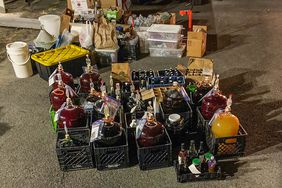