With beef and bun hanging out of his mouth and the clock rapidly ticking down to zero, 23 year old Matt Stonie was relishing the changing of the hot dog eating guard. The young upstart had defeated eight-time reigning champion Joey Chestnut in the 99th annual Nathan's Famous Hot Dog Eating Contest by consuming 62 tubes of meat to Chestnut's 60. It was an upset of foot long proportions.

As it always does, the 2016 Nathan's Famous Hot Dog Eating Contest will commence on Independence Day at the Nathan's on Coney Island in New York. This year's edition will mark the 100th anniversary of this venerable race. Here's the history of how this gluttonous competition got started and became an intrenched part of America's holiday tradition.

Upon a Trans-Atlantic steamer, 20-year-old Polish immigrant Nathan Handwerker arrived in America in 1912. He found work as a dishwater on the Lower East Side at Max's Busy Bee, a popular New York chain of restaurants. Handwerker soon graduated to delivery boy, making $4.50 a week, as well as working weekends as a roll-slicer at Charles Feltman's German biergarten at his Coney Island resort. Feltman is a legendary figure in Coney Island's history, known for building what was billed as the "world's largest restaurant," attracting a higher-class of visitor to Coney Island and being the first to put a pork sausage on a bun (to some, that means he invented the hot dog). Charging ten cents a sausage, even his own employees thought that was too much for a few bites of food. The story goes that Handwerker was so determined to save money that he slept on Feltman's kitchen floor and lived off of free hot dogs for a full year. By 1915, he had saved three hundred dollars, enough that when two singing waiters - Eddie Cantor and Jimmy Durante, both of whom went on to vaudeville fame - told him he should start his own business and charge only five cents per sausage, he listened. In the summer of 1916, Nathan opened his hot dog stand at the corner of Stillwell and Surf Aves, a mere block from his former employer.

While Handwerker may have popularized it, he was not the first to use the word "hot dog." One apocryphal story goes that in 1901 the New York Evening Journal's sports cartoonist Thomas Aloysius Dorgan overheard a vendor at New York's Polo Grounds yell, "Get your red hot dachshund sausages!" Not knowing how to spell "dachshund," he wrote "hot dog" under the image of the sausage. According to etymologist Barry Popik, this story is false. The word actually arose a few years earlier as a slang word used by Yale students when describing sausages because there was a belief that they were made out of dog meat, a thing that Popik claims "had a basis in fact."

Despite undercutting Feltman's prices and using his wife Ida's secret spice recipe, Nathan's hot dog stand struggled. This perhaps had something to do with a dirty trick that Feltman apparently deployed against his ex-employee: spreading rumors that the reason Nathan's dogs were cheaper was because he was using meat other than cow - maybe horse or actual dog. Not one to miss a chance to promote his business, Handwerker responded by hiring people off the streets, throwing a white lab coat on them and proclaiming them doctors from a nearby hospital. Then, he gave them free hot dogs. Passersbys walking past saw what they thought were a group of doctors eating at Nathan's - convincing them that if a group of health care professionals were enjoying Nathan's hot dogs, then they must be good enough for them.

Of all the stories about Nathan's the one about how the hot dog eating contest came to be may be the least verifiable, but it shouldn't be totally discounted. Always a fan of a publicity stunt, Handwerker no doubt encouraged the proceedings. The legend goes that on July 4th, 1916, Nathan overheard several recent immigrants arguing in a large crowd about who was most American. Thinking fast on his feet, Handwerker stepped in and told the men that whoever could eat the most of his hot dogs should be considered the most American. The men took up the challenge and an Irish immigrant named James Mullen proved victorious, eating 13 dogs in 12 minutes. The Nathan's Hot Dog Eating Contest was born.

A century later, the Nathan's Hot Dog Eating Contest is a curious part of American culture and history. Seemingly everyone, from Bugsy Siegel to Lucille Ball to Bernie Sanders, have intersected with this Coney Island institution at one time or another. Reportedly, a struggling actor that would later become known as Cary Grant once worked there. Nathan's even helped to spawn the professional competitive eating league.

As the Nathan's Famous Hot Dog Eating Contest celebrates its 100th birthday, its place in history is secure, unlike the partially-chewed hot dogs of the contest's competitors. 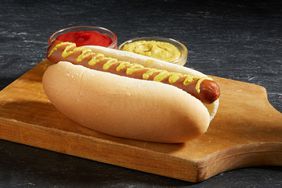 Nathan’s Famous Is Adding Vegan Hot Dogs to Its Menu