Our takeout French fries are saved.

If you search eBay right now, there are currently almost 100 active auctions for… ketchup packets. The listings range from 50 single-serving Heinz packages for $9.99 (or whatever the seller determines is the "Best Offer"), to what appears to be someone's personal collection of McDonald's packets, to a single seven-gram serving of Heinz that already has two bids.

These opportunistic eBayers seem to be responding to our most recent pandemic-related product shortage. According to The Wall Street Journal, when we collectively pivoted away from eating in restaurants in favor of delivery or collecting our orders to go, restaurants had to shift from using bottles of ketchup to dropping several packets in all of those to-go orders.

As a result, packets—or sachets, in the ketchup business's preferred parlance—are now in short supply, and the cost of those squeezable single servings has increased 13 percent since January 2020.

The Journal reports that restaurant chains like Long John Silvers have had to turn to "secondary suppliers" to score some sachets, while Texas Roadhouse says some of its managers have gone to Costco when their suppliers couldn't provide bottles of Heinz. (A spokesperson for Texas Roadhouse says that the chain has even considered finding an alternative for Heinz ketchup, the chain's preferred brand.)

And Chris Fuselier, the owner of Denver restaurant Blake Street Tavern, says he's occasionally gotten even more desperate. "It's gotten so bad that when I go to McDonald's or Wendy's, I'll hoard those extra packets to bring back to Blake Street," he told CNN.

According to the Journal, Heinz is, hands down, America's preferred brand of ketchup, with almost 70 percent of the total market share. The company recently promised to increase its production by 25 percent this year, in order to get more single-serving packets back in more places. It expects to produce more than 12 billion ketchup packets a year, going forward.

"We made strategic manufacturing investments at the start of the pandemic to keep up with the surge in demand for ketchup packets driven by the accelerated delivery and take-out trends," Steve Cornell, Kraft Heinz's president of enhancers, specialty and away from home business unit, told CNN. "At the same time, we also fast-tracked future-focused culinary and packaging innovations, as well as further manufacturing expansion plans."

Meanwhile, Red Gold, which describes itself as the "second largest manufacturer of tomato products in the United States," said in a press release that there was no ketchup shortage and that ketchup was "not the next toilet paper," a reference to all of those empty shelves from earlier in the pandemic, but the company also acknowledges that its "capacities for producing ketchup packets are temporarily strained" due to increased demand. (Red Gold also tried to throw some tomato-flavored shade at Heinz, harrumphing that Heinz probably had more like 57 percent of the total ketchup market.)

"Red Gold encourages you to be loyal to the brand that's loyal to you," it wrote. "Among restaurant customers, a survey by Datassential found patrons frequent a particular restaurant because of its menu and its service, not because of a brand of ketchup that it serves."

Not having any ketchup might be a problem, though. 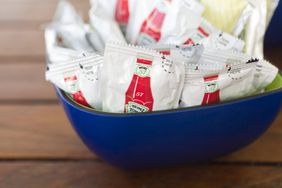