We tried them all, including Irish Cream Brownie, Rum Tres Leches, and Bourbon Vanilla Bean Truffle.

Consider your movie night in officially upgraded: Häagen-Dazs just debuted a new line of ice cream called "Häagen-Dazs Spirits," and it's exactly what it sounds like. Booze. Infused. Ice. Cream. The new flavors experiment with combinations ranging from Bourbon and pecan praline to rum and tres leches, and they'll be hitting the shelves of your local supermarket soon. I was lucky enough to get a first try—and they were even more indulgent than I expected.

And let's address the elephant in the room—this ice cream won't get you tipsy. The alcohol content is 0.5 percent by volume, so unless you eat an entire freezer's worth of cartons, you probably won't feel much. The low alcohol content also means you won't need an ID to purchase it—so feel free to buy all the Bourbon-infused ice cream your heart desires without having to reveal your real age to the cashier.

If you want to try boozy Häagen-Dazs yourself, you won't have to wait long. The collection is already rolling out in grocery stores nationwide now, according to a statement, and should be "widely available" by April. Each 14-ounce carton (and the package of three squares) will cost $5.29. Those who live near Häagen-Dazs shops can also expect to find select Spirits ice cream flavors on the menu starting March 1. You can opt for a cup, cone, sundae, or "premium milkshake." A Rum Tres Leches shake? I'll take five. 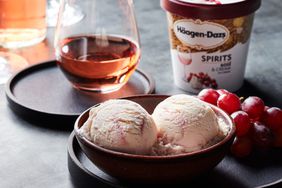