Forget "Mayor of Flavortown," Guy Fieri is looking to be "President of Flavornation." The charitable celebrity chef known for taking viewers into the kitchens of diners, drive-ins, and dives across the U.S. has started using other people's kitchens to launch a new delivery-only "virtual restaurant": Guy Fieri's Flavortown Kitchen.

Created in partnership with the ghost kitchen experts at Virtual Dining Concepts (VDC), this new Guy Fieri venture is currently in its "soft opening" phase with delivery being offered in a "handful" of cities—and more set to open on a weekly basis, according to VDC.

But wherever you live, don't try to stop by and say hi to Guy. All of the locations are delivery-only because they operate out of other restaurants or kitchen facilities. For instance, in Seattle, Eater reports at least one location is based out of a Buca di Beppo. And in Boston, the blog Boston Restaurant Talk says that the chain is working from "at least some Bertucci's locations."

The menu is relatively small: just 19 items in all (two of which are desserts). "Shareables" include Jalapeno Pig Poppers (bacon-wrapped stuffed jalapenos), cheesesteak egg rolls, both Buffalo and bourbon brown sugar BBQ wings, and queso dip. Burgers come either "Real Cheezy" or "Bacon Mac N Cheese"-y—both of which are served with Fieri's famous Donkey Sauce. Or you can opt for a veggie burger, chicken sandwich, or Crazy Cuban Sandwich. Entrees include Cajun Chicken Alfredo, Chicken Parm-eroni, an Italian Stallion Salad, and the 'OG' Caesar Salad. Three comforting side choices are Flavortown Fries, Mac Daddy Mac N Cheese, and Fried Pickles & Ranch. And then dessert is either the Cheesecake Challenge or the Choco Whiskey Cheesecake.

Ready to have Flavortown sent straight to your door? Assuming you're within the delivery range of one of the dozens of locations, orders can be placed via the chain's website, Guy Fieri's app, or through "most" delivery services including Grubhub, DoorDash, Postmates, UberEats, and Seamless. 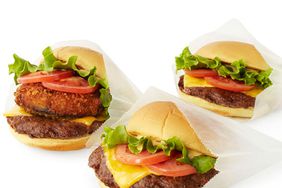