That's a lot of Thin Mints.

Due to the COVID-19 pandemic, the 2021 Girl Scout cookie selling season has been wild, according to Trish Bauer, with scouts forced to focus on online sales and delivery — but even still, her daughter Lilly Bumpus was able to set an impressive record: The most Girl Scout cookies ever sold in one season, 32,484 boxes.

Lilly — an 8-year-old "brownie" level scout in San Bernardino, California — was able to smash the previous record of 26,086 boxes thanks to her remarkable background story, her emphasis on donating boxes to charity, and her relentless commitment to sales which took place both online and during hours spent set up in front of her house, according to the San Jose Mercury News.

As a toddler, Lilly survived Ewing's sarcoma, a rare type of cancer, inspiring the creation of the Team Lilly Foundation, a nonprofit to support those dealing with childhood cancer. Charity has been a large part of Lilly's life, and raising money through Girl Scout cookies is apparently no different.

"When I told her at the beginning of the season how tough it would be to sell this year, she told me, 'Nothing is impossible if everybody chose to make it possible,'" Bauer was quoted as saying. "A lot of people approached us saying we must have gotten big businesses or sponsors to buy from us, or big donations… The biggest order placed was 100 boxes. Lilly reached 32,000 boxes out of everyone seeing value in buying one box, two boxes, four boxes, and everybody working together to try to be a small piece of a really big puzzle."

Setting the record also required a final push. The Mercury News explained that, with about a week left to go, Lilly realized the previous record was higher than they had thought, and they would need to sell a couple more thousand boxes. "She sold her freaking heart out till the last day," Bauer continued. "We boothed 11 hours straight outside our house and sold 500 boxes in one day. It's Lilly being Lilly. She does not like somebody telling her something is not possible."

Boxes were reportedly purchased from all 50 U.S. states, as well as foreign countries like Canada, Italy, and Egypt — and 5,200 of those boxes are set to be donated across multiple groups including hospitals, the homeless, and troops overseas. Meanwhile, much of the money raised will go to childhood cancer research and feeding the homeless on Los Angeles's Skid Row.

"It feels like the world believes in me and it feels really good," Lilly told The Mercury News. "It means so much to me that people are coming to support me by buying cookies." 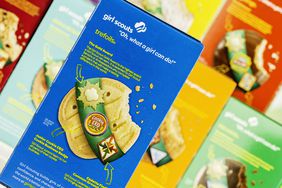 Atlanta Girl Scouts Are Stuck with $3 Million in Unsold Cookies 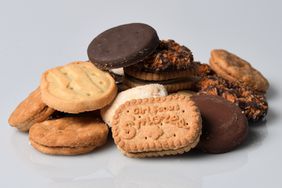