Secretary of State Brad Raffensperger has spoken out against “line warming.”

Thanks to a now-public discussion with President Trump, Georgia’s Secretary of State Brad Raffensperger is suddenly the most prominent name in election integrity. And for Georgia’s U.S. Senate runoffs tomorrow, Raffensperger is doing more than just taking phone calls. Last week, his office announced they were cracking down on so-called “line warming” at polling places—saying that voters shouldn’t even be offered food and drink from organizations like Pizza to the Polls while waiting to cast their ballot.

In an Official Elections Bulletin, Secretary Raffensperger reminded county elections officials that they should be enforcing a legally-required “buffer zone outside of polling locations and near voters in line,” allowing citizens to “cast their ballots without political interference or harassment.” According to Raffensperger’s office, “Georgia law prohibits individuals from soliciting votes within 150 feet of a polling location or within 25 feet of a voter standing in line to cast their ballot.”

The bulletin applies to all giveaways, but Raffensperger’s office specifically mentions food and drinks, adding that, according to Georgia law, giving or receiving of any “gifts”—edible or not—is a felony. “The right to vote is sacred and fundamental to our democracy, and I am committed to upholding that right for all Georgians,” Secretary Raffensperger stated. “Political organizations looking to game the system should be forewarned that we will not tolerate efforts to electioneer near polling sites in violation of the law.”

However, whether offering food and drinks actually violates Geogria law is up for debate. Before November’s general election, Henri Hollis of The Atlanta Journal-Constitution described the practice as a “legal gray area.” “According to attorney Dara Lindenbaum, counsel for the nonprofit voting rights group Fair Fight Action, there’s a loophole: As long as anyone, such as poll workers or passers-by, can partake in the offerings, the food and drink are clearly not a reward to voters,” he wrote. “In the real world, election officials tolerate volunteers giving out food and drinks at polling places as long as there is no partisan influence.”

Interestingly, Raffensperger specifically acknowledges this loophole, too: His announcement states that the hope is “to crack down on political organizations and advocacy groups that use ‘line warming’ as a loophole to conduct political activity in violation of state law.”

So is offering voters hot pizza and warm drinks on a cold Georgia day against the law? As contentious as the 2020 election has been, it'll probably be up to the courts to determine whether keeping people fed as they wait to exercise their voting rights is an attempt to influence voters or simply to offer them a free slice of pepperoni. 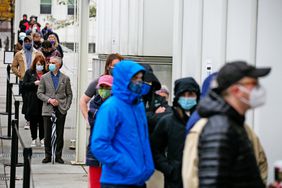 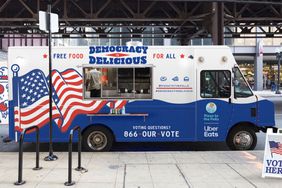