Georgia's Governor Says Restaurants Can Reopen. It's Way Too Soon

Chefs are pushing back against the rush to reopen, citing public safety.

“To anyone who wants to hear it: I am the leader of my restaurants,” chef Hugh Acheson wrote on Twitter on Tuesday. “I will say when we open. It will be when I feel it is safe for those I employ, my family and my customers. No one tells me when to open. Period. And not Monday.”

He was responding to Georgia Governor Brian Kemp’s controversial decision to reopen restaurants next Monday, April 28. Although bars will remain closed, other “non-essential” businesses like nail salons and gyms are set to reopen if they follow additional social distancing and hygiene measures (which are notoriously hard to enforce). Kemp, one of the last governors across the country to shut down businesses, is now among the first to reopen them. The move has been met with significant pushback from chefs, business owners, and even President Trump, who said he “strongly” disagrees. Several mayors in the state, including in Atlanta and Roswell, have also spoken out against the decision, urging people to stay home.

Over 100 Atlanta restaurants currently plan to remain closed, according to local NPR station WABE. Scott Palmer’s five Atlanta restaurants are part of the contingent. “We are choosing to stay closed at this time for the health and safety of our employees and guests,” he told Food & Wine.

Brian Maloof, owner of Manuel’s Tavern in Atlanta, agrees. “As much as I would like to be open, it's not happening. Being closed has not been fun, but it's been the safest, best thing we could do for our staff and our customers,” he wrote on Facebook.

Stephen Kaplan, COO of Rumi’s Kitchen in Atlanta, is also following suit. “While the idea of reopening is certainly hopeful that someday life will go back to normal, the safety of our staff and guests is our highest priority,” he told Food & Wine. “We will not be opening our dining room this coming Monday. Instead, we are continuing to serve our community with curbside pickup and home delivery through our online ordering system, and evaluating the ever-changing climate on a day by day basis.”

Although restaurants in Georgia continue to struggle to pay rent and write paychecks in the wake of scant stimulus funds, opening for dine-in is just not a solution many are willing to risk. And many public health officials agree.

Read more: What the Second Round of CARES Act Funding Means for Restaurants

Dr. Rachel Patzer, an Emory University epidemiologist, expressed disappointment in the governor’s decision. “In the last 24 hrs, GA had >900 new cases & >80 deaths,” she tweeted on Monday. “Social distancing has been working and helped flatten the curve. But with no vaccine, limited population-based testing & contact tracing, and community spread among asymptomatic patients, it’s premature to reopen.”

In addition to the obvious public health risks, there are consequences for laid-off staff currently receiving unemployment. If their restaurant reopens—despite significant advice to the contrary—and they don’t come into work due to safety concerns, they’re at the risk of losing benefits.

According to Georgia Labor Commissioner Mark Butler, laid off staff can technically retain their benefits even if their business reopens, but they’re going to have to show proof of any medical concerns. And right now, even getting to a doctor—especially if you don’t have health insurance in the first place—is a challenge.

The situation for restaurant owners also doesn’t look great, either. If a restaurant is legally allowed to open, then filing for business interruption insurance might be denied, some restaurateurs have pointed out. In other words, some people are saying that Kemp’s move to reopen is not actually a pro-business move throwing a lifeline to small businesses, but rather a way of legally denying them the insurance safety net to which they’d otherwise be entitled.

What are chain restaurants doing in all of this? Not too much, as of yet. The iconic Southern chain Waffle House, which previously suggested keeping dining rooms half-full in hopes of avoiding closing altogether, hasn’t announced a reopening date. The company did tell The Atlanta Journal Constitution that any ramp up in opening hours would be gradual. Right now, it’s said it’s waiting on further information from the governor.

Meanwhile in Seoul, South Korea, many restaurants are operating at full capacity, with almost all servers and patrons wearing masks. The country was initially one of the hardest hit in the global pandemic, but, thanks to ubiquitous and free testing—and months of social isolation—the country has returned to someone of a “new normal,” Bloomberg reports. The country is being hailed as something of a coronavirus success story. Public health officials also point out that, given the difference in the United States’s infrastructure and resources—notably with testing availability—we can’t quite reopen yet. 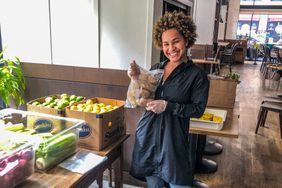 As Restaurants Close, Some Are Becoming Food Pantries 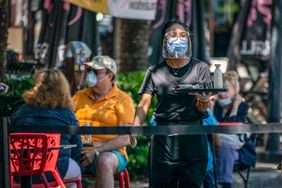 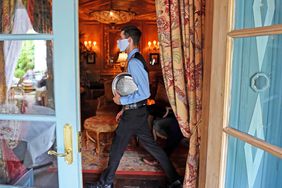 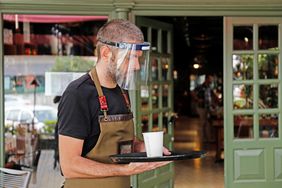 An Open Letter to Our Dining Community 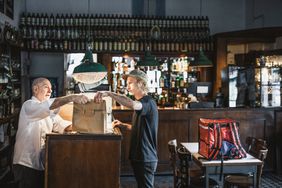 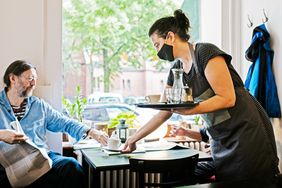