AS I WALKED FROM THE STATION TO THE HOME of Pierre and Frédérick Hermé in Asnières--a typical bedroom community about 15 minutes from the center of Paris--I saw the usual baby carriage gridlock in front of the boulanger and matrons deep in gossip with the pharmacist's wife. The narrow side streets were bumper-to-bumper with last year's models of midlevel Renaults, Peugeots and Volkswagens--the cars of middle management--and beyond them were sedate, walled-in houses with turn-of-the-century trim and manicured shrubs. One aggressively modern structure, all steel and glass and jutting angles, stood out. A small sign said "Hermé's House." Not "M. et Mme. Hermé." Not "Chez Hermé." "Hermé's House"--and in a land that not too long ago tried to outlaw the use of English. It gave me my first clue about the Hermés: the two are distinctly iconoclastic.

If Paris has a culinary power couple, the Hermés are it. Pierre, 37, is a fourth-generation baker and pastry chef from Alsace who has had just about every encomium heaped on him. Routinely hailed as a genius, a poet, the new pastry king of Paris (succeeding his mentor, Gaston Lenôtre), Hermé is the only practitioner of his craft to have been named a Chevalier de l'Ordre des Arts et Lettres, an honor usually reserved for media celebrities like Gérard Depardieu, Paul Newman and Stephen King.

At 24, Hermé was the wizard behind the confections at Fauchon, the great food store on the Place de la Madeleine. He offered 150 specialties at any given time, and twice a year he also held presentations of new creations--debuts followed hungrily by the French food press. In due course a number of his nouveautés entered the pantheon of French desserts--for example, "Cherry on the Cake," a complex confection that looks like a milk chocolate-coated Flatiron Building with a huge glazed cherry on top. (It came out of a collaboration with the graphic designer Yann Pennors.)

Two years ago Hermé left Fauchon to take over the direction of Ladurée, the mythic pastry shop and tearoom on the Rue Royale, and he masterminded the newer Ladurée on the Champs-Elysées. The latter is a rococo grand café that serves three meals and gives Hermé the opportunity to create savory dishes as well as sweets. And as if all that weren't enough, Hermé has written five books, including a dessert bible for Larousse. He makes his American debut this month with Desserts by Pierre Hermé (Little, Brown), a collaboration with Dorie Greenspan, herself the award-winning author of five cookbooks.

His spirited and intense wife, Frédérick, was Alain Ducasse's private chef (imagine!), and she has written a droll cookbook, La Cuisinière du Cuisinier, about the experience.

To the Hermés, a recipe is never--ever--finished. Pierre has revised the recipes of just about every dessert that has crossed his line of vision, starting with the foundations. He makes a crisper pâte brisée by adding milk and extra butter. Finding the traditional croissant too dense, he adds more butter and sugar as well as Brittany sea salt; the result is more textured, airier--and a mini scandal among croissant conservatives. He finesses the controversy by offering his clients both the old and the revised versions.

The Hermés share their culinary enthusiasms at informal weekly dinners for which Frédérick generally prepares the savory dishes, Pierre the sweets. I was invited along with six of Pierre's favorite winemakers, each of whom was contributing a bottle. The Hermés had planned an ultratraditional French menu, but I already knew about their wont to tinker.

Take the kugelhopf hors d'oeuvre, a recipe from Pierre's childhood in Alsace. Pierre's version of the buttery breakfast bread was studded with walnuts, onions and bacon and topped with almonds; they served it with small cups of spiced, whisked tomato juice.

Or consider the soup. One of the most rustic French soups is a broth thickened with leftover bread. In Frédérick's elegant rendition (based, she said, on an 18th-century recipe), fresh bread crumbs were whipped to a rich froth with chicken broth and Parmesan and then drizzled with olive oil.

Pierre and Frédérick aren't averse to borrowing from other cuisines (fighting words in France), and Frédérick chose a Moroccan sauce--a tagine-like blend of chicken stock, preserved lemon and olives--to enliven an old Breton recipe for turbot. The entrée veered back in the direction of bourgeois cooking: a Coq au Vin made with dark meat (Frédérick finds white meat good only for broths), pearl onions, bacon and mushrooms and served with the homey Alsatian spaetzle Pierre ate as a child.

For dessert, Pierre spooned lemon cream over corn kernels (he shares an American passion for sweet corn), apple and pineapple and topped the fruit salad with a round of white chocolate. Finally, for his Mozart cake (named for the Austrian technique of using hard-cooked yolks in pastry), he stirred diced apple into a chocolate mousse, which he sandwiched between layers of cinnamon-accented pastry.

Pierre knew the vintnersat the dinner professionally: they all have wines on Ladurée's exemplary list. His own interest in wine seems to be a natural extension of his fixation on what he calls "the architecture of taste." Where better to find structure, texture, depth and nuance of flavor than in wine? His first criterion is simple pleasure: "I have to want to drink the wine," he told me. "Later I try to understand it."

At first glance, the winemakers looked like a disparate group--from Didier Dagueneau, with his red mane and his grunge garb, to Jean-Paul Gentile, who suggests a junior banker, and Jean Thévenet, donnish in a houndstooth-check jacket. But after a while I recognized the traits they shared: an openness of spirit, a clear vision and the willingness to reinvent the wheel in order to realize it. Sometimes dismissed as radical, these six winemakers are really the vanguard; the practices that made them pariahs--especially reverence for terroir (the particular soil and microclimate of a vineyard site), which gives a wine its unique identity--have turned them into prophets, and their wines sell out to a cultlike following.

At home they are viewed as enfants terribles. Each has had problems with the law or with confrères, the most dire being the tasting requirement of the INAO (Institut National des Appellations d'Origine), the government agency that regulates the production of France's top wines. In order to receive the coveted appellation contrôlée status, a wine must pass muster with a committee of tasters--usually neighboring vintners, local sommeliers and the like. But because these vintners' wines do not taste typical (they might be richer, oakier, sweeter), they may fail the taste test and forfeit the appellation. Bernard Foucault, for example, had to submit his luxurious--and to some palates distinctly oaky--1994 red to four different tasting panels before getting the Saumur-Champigny appellation. Gilles Jayer-Gilles could well understand the situation, as he has been criticized for his heavy reliance on new oak barrels to age his wines. Didier Dagueneau sells his off-dry Sauvignon Blanc as a simple non-appellation vin de table, relying on his celebrity rather than the Pouilly-Fumé name to sell the wine. And since Anselme Sélosse creates his vintage Champagne to age for 10 years, his 1988 tasted atypical when he presented it in its infancy. The panel eventually recognized the wine's potential and the matter was resolved favorably. (A non-appellation Champagne would be sent to a distillery--the equivalent of dumping it down a sewer.)

Such was the substance of our dinner-table conversation. Pierre Hermé hadn't realized, he said, that each of his guests was a rebel on his home turf. He had simply admired their wines. Despite similar assaults on conventional wisdom, Hermé has been embraced by his own colleagues. Could he see any basic trait, I asked him, that he shared with his guests? He pondered for a moment and replied, "The desire to do something well no matter what others may say."

Recipes by PIERRE AND FRÉDÉRICK HERMÉ; text by JACQUELINE FRIEDRICH, the award-winning author of A Wine and Food Guide to the Loire (Henry Holt). 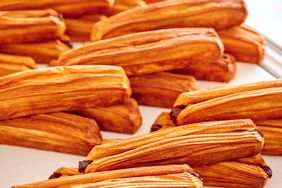 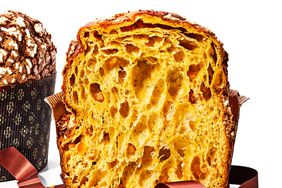