"Slice of Sauce" is finally ready to bring its "no-mess" condiments, including ketchup, sriracha, and Secret Aardvark Habanero Hot Sauce to the masses.

Back in 2018, a Kickstarter for a product called "Slice of Sauce" made headlines with an idea that is as mindblowing as it is a potential game-changer: packaged "slices" of ketchup billed as a "no-mess" and "zero soggy bun" way to enhance burgers, sandwiches, and wraps. The idea of sliced condiments has continued to bounce around in the public consciousness since, but Slice of Sauce has been relatively quiet… until recently.

Officially launched last year, Slice of Sauce grabbed a larger spotlight last week after appearing on Shark Tank. Baseball legend and guest shark Alex Rodriguez bought into the concept with a $200,000 investment, and the brand revealed an innovation that may finally cement its game-changer status: name-brand hot sauce slices!

From its humble ketchup beginnings, Slice of Sauce is now accepting online preorders for two spicy new slices: Frank's RedHot Original Cayenne and Secret Aardvark Habanero Hot Sauce. Both products are official collaborations made with the actual sauce brands and are being sold in eight-slice packs for $5.99. (Slice of Sauce also makes a fourth type of slice—Spicy Sriracha—but that's not an official collaboration with you-know-who, so it's perhaps not quite as exciting.)

"We had always dreamed of collaborating with existing sauces to share familiar flavors in a new form," founders Emily and Cole Williams told me via email. "These two brands are some of our absolute favorites so we used some good old fashioned networking, hard work, and collaboration to develop the relationships."

So how exactly do you make a slice of sauce? Emily explains that the gluten-free and vegan slices made with no artificial ingredients were originally spawned from leftovers from a family BBQ recipe that called for discarding vegetables used to make the sauce. She mixed and dried them instead, and Slice of Sauce was born. However, the original ketchup version did take additional "months of testing and development."

In that vein, the brand is still growing. For now, all of the slices will only be sold online. "We are really excited about our e-commerce platform so we will focus our efforts there for the next few months but we are speaking to several stores," Emily and Cole continued. "We're not sure what the future holds but it certainly looks bright." If you do make a pre-order, the couple says they don't yet have a specific date for sending them out, only that they are "working as fast as we can." Whenever they're ready, you can score your own slices at www.sliceofsauce.com. 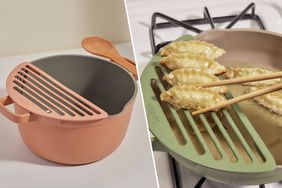 If You Hate the Mess of Frying at Home, This $30 Tool Is for You