Across the country, initiatives from big names like José Andrés and Uber Eats have promised free food to poll workers and voters waiting on long lines.

Everyone knows that a presidential election is right around the corner. But more so than previous years, a big unknown is what to expect at the polls this year. Between a global pandemic and a historically contentious atmosphere, wait times are expected to be high, as will irritability. So across the country, initiatives are popping up to help offer comfort the old-fashioned way—with food.

One large effort, announced today, comes courtesy of Uber Eats and perennial voter-feeding non-profit Pizza to the Polls. Together, they’ll be sending out a fleet of over 180 food trucks to 25 cities, offering free food from their partners like Shake Shack and Milk Bar to citizens stuck in voting lines. The program is set to start on October 24—aka Vote Early Day—and run through Election Day.

“As part of Shake Shack’s mission to Stand For Something good, it’s important to us that our teams and our communities are empowered to use their voice and show their civic engagement,” Jay Livingston, Shake Shack CMO, stated. “We’re thrilled to partner with Uber Eats and Pizza to the Polls this Election Day as we celebrate the democratic process.”

For the even more culinary minded, last month, Chef José Andrés announced that his globally omnipresent non-profit, World Central Kitchen (WCK), was launching a similar nationwide initiative to feed both voters and poll workers called Chefs for the Polls. Currently slated for 23 cities across 14 states with “more to come,” the program will see WCK’s partners in these areas setting up near polling locations on early voting days and Election Day “sharing meals with anyone—no questions asked.” (The complete list of cities can be found on the Chefs for the Polls website.)

“People often cast their vote before work, during their lunch break, or after work—all prime meal times,” Chefs for the Polls writes on its website. “We will use the power of food to make Election Day one of community and hope.” To further these efforts, WCK is currently asking for people to donate to the program online.

Beyond voters, some parts of the country are also struggling to find enough people even to work at polls. In Philadelphia, restaurants have teamed up with the hope that a good meal can solve that problem, too. Fuel the Polls is a partnership of about a dozen local establishments—including top spots like Michael Solomonov’s Laserwolf—which have promised to deliver meals to workers at polling places across the city. All a poll worker has to do is fill out an online order form.

“Most of the people who staff the polls are in the 60-plus range, and as they are an especially at-risk group right now, many are (wisely) electing to sit this one out. That means Philly is 3,500 people short of being able to fully staff all its polling places!” Daniel McLaughlin, owner of Mission Taqueria and visionary behind Fuel the Polls, told Philadelphia Magazine last week. “This should be easier, but it’s not. So if bribing people with a free lunch adds enough cool factor to this civic duty for people to actually participate, then hey, I’ll make 300,000 burritos if that’s what it takes.”

Meanwhile, these multi-partner programs are likely just the most visible examples of a larger sentiment from restaurants across the country. For instance, yesterday, the Orlando Sentinel pointed to an individual pizzeria—Winter Garden Pizza Company—that was planning to bring food to their local polling place on Election Day. “There’s no agenda here whatsoever. It’s just patriotism. Americanism. We have to carry the torch for the people who gave us this right,” owner Stephen Facella told the paper. “And so: Garlic rolls to the polls!” Hopefully, a restaurant or two near your polling place will arrive with a similar motto… even if garlic rolls specifically aren’t on the menu. 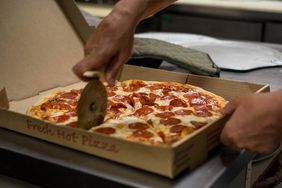