The film tells the story of Richard Montanez, the Frito-Lay janitor who invented one of today's most popular snack foods.

At a time when presidents ponder nuking hurricanes, we've gotten used to being surprised by unlikely headlines. So when the Hollywood trade paper Variety publishes the story "Eva Longoria to Direct Biopic About Flamin' Hot Cheetos Creator," your first instinct might be to do a double-take. Who is directing what movie now? But despite how it sounds, Longoria's forthcoming flick — tentatively titled Flamin' Hot — might be much more than meets the eye.

First off, Richard Montanez's story is truly incredible: As the legend goes, he was working as a janitor at Frito-Lay when he came up with the concept for Flamin' Hot Cheetos — bringing some powderless curls home from the plant and, taking inspiration from his Mexican heritage, coating them with a chili powder typically used for elote. Beyond becoming an iconic snack, Flamin' Hot Cheetos also started Montanez's ascent up the corporate ladder — a true janitor-to-executive story.

But is it enough to entertain audiences in a feature-length capacity? That task will be in the hands of Longoria, who, frankly, might be the riskier choice of the pair. Though, according to IMDB, she has about a dozen directing credits under her belt, a feature-length film isn't yet one of them. However, as the daughter of Mexican immigrants herself, Longoria can clearly bring plenty of perspective to the story of a man who grew up in a migrant labor camp as the son of a Mexican immigrant.

Interestingly, the movie itself could also be considered part of Montanez's rags-to-riches story. The Flamin' Hot Cheetos creator helped develop and pitch the idea. I don't want to tell Charlie St. Cloud writer Lewis Colick, who will be penning the screenplay, how to do his job, but I'm thinking maybe a self-reflexive opening scene where we see Montanez pitching the movie we're watching. (Call me, Lewis.)

Meanwhile, though Longoria certainly doesn't need to prove anything in her award-winning acting career, directing Flamin' Hot could definitely build her legacy: Deadline points out, "Only one Latina in the past 12 years has directed one of the top 1200 grossing films." At a time when immigration has become such a major issue, this movie may actually be far more important than a Variety headline even hints at. 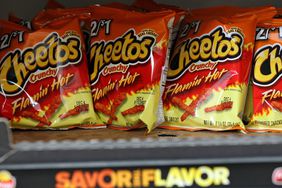 The Janitor Credited with Creating Flamin' Hot Cheetos Had Nothing to Do with Them, L.A. Times Reports