Tater Tots Are Finally Getting the Festival They Deserve

This weekend, a town in Oregon will celebrate the popular potato product invented there nearly 70 years ago.

Ontario, Oregon, a town of just under 11,000 on the state's border with Idaho, is the birthplace of Pulitzer Prize-winning author Phyllis McGinley, Pro Football Hall of Fame linebacker Dave Wilcox, and the tater tot. But, with apologies to the poet and the Pro-Bowler, only one of them is being celebrated with a two-day festival this weekend.

At 4 p.m. today, the first-ever Tater Tot Festival will kick off in historic downtown Ontario, and it plans to celebrate one of the world's best potato-delivery methods to the fullest. Some of the weekend's events include a full carnival-style boardwalk, a taste test to determine the winner of the Tater Tot Cooking Competition, and a Tater Tot Eating Contest. ("We have an EMT that will be standing by in case anyone chokes," Charlotte Fugate, the president of Revitalize Ontario, told the Malheur Enterprise.)

For $5, attendees can get a sampler platter of the five finalists in the cooking competition, which include a jalapeño popper tater tot casserole, twice-baked tater tot cups, breakfast tater tot biscuits, steak bomb tater tot waffles, and ranch tater tots. The winner will be whichever dish receives the most votes between Friday night and Saturday morning.

One of the event's sponsors is Ore-Ida, the tater tot giant that was originally founded in Ontario almost 70 years ago. Brothers Nephi and Golden Grigg had been growing, selling, and shipping sweet corn up and down the west coast. When a "quick-freeze factory" was built in Ontario, they embraced the new technology and were able to start distributing their corn to the other side of the country.

The Griggs eventually bought the plant following some poor design and personnel decisions by its original owners and realized that, in order to keep it going, they would have to start processing other fruits and vegetables as well. They turned their attention to potatoes and soon started making their own frozen French fries. The only problem was the huge amount of potato scraps that were left over after the fries had been sliced and frozen.

According to Willamette Week, they originally tried selling them to farmers as cattle feed, but decided that there was too much value left in those potatoes for them to end up in a trough. After some experimentation, they discovered that they could dice the potato slivers even smaller, mix them with flour and assorted seasonings, and fry them. Their new product got its now-signature shape after the potato-and-flour mixture was pushed through a piece of plywood that one of the brothers had cut small holes in.

There was a company-wide contest to come up with a name for the creation. "One of the employees there — Clora Lay Orton — she won," Nephi Grigg's son Steve told the outlet. "'Tater' for potato and, of course, 'tots' for small. Makes perfect sense to me."

The tots weren't quite an overnight sensation — more like a couple of nights — but once they caught on, their popularity didn't slow down. The Griggs had to open a second factory just to make tater tots and, in 1965, they sold Ore-Ida to H. J. Heinz for $30 million. (That's roughly the equivalent of $265 million in today's dollars.)

"I think it was just so unique," Grigg said, of his dad's legacy. "It was convenient. It was funky — it had a funky name. Of course, the movie Napoleon Dynamite didn't hurt."

It might've taken almost 70 years, but tater tots are finally getting the festival they deserve. 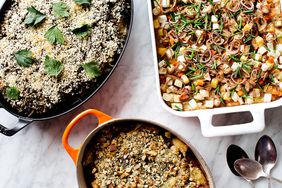 The History of Hot Dish