Joined by Guy Fieri, Queen Latifah, and more pieces of shrimp than I knew what to do with, I slept aboard a giant boat for the first time in my life. The experience was illuminating.

I've already lied to you, and the story hasn't even begun. I may have, technically, been on a cruise before. In 2013, I packed my things and snuck onto a small overnight ferry leaving Italy for Croatia, where I lived for the next several months, working my way into the social circles of elderly radish farmers. But was that a cruise? I don't think so, at least not in the modern sense. (There was no food on board, and I slept pigeon-pose in a folding chair.)

Cruises, as we know them today, are about leisure and spectacle—not just getting from point A to point B, or fleeing one country for another.

"You just go on board and are transported to a floating bizarro world, and wifi is expensive and almost never works, so you're forced to unplug," said PEOPLE food editor Shay Spence, a man who is obsessed with cruises (and goes on several a year.) "There's a serious cheesiness factor that you have to just lean into and accept."

I'd never stepped foot aboard a vacation cruise boat, let alone one with a Dr. Seuss-themed water park, a city's worth of themed dining concepts, terrifying sky rides where you bike through the air, and celebrity appearances, so when I was invited on the Carnival Horizon, a brand-new boat, for a night docked on the Hudson River, I couldn't turn it down.

But I was nervous.

Would I get sick from the rocking? Do boats that big rock? Would the food be horrible? Would the live entertainment make me uncomfortable, or worse, would I be asked to participate? And besides, where do they put all the poop?

After a whirlwind 16 hours aboard, I'm sharing with you what I learned about the American cruise phenomenon.

Looking back, I feel like this should have been obvious, but I didn't expect it at all. The flush sounds like you're being zapped to another portal.

One of the many dining options aboard the Carnival Horizon is Fieri's Smokehouse Brewhouse. The night I was there, the Food Network star was also there, too, rocking a camo tee and mingling with fans. And you know what? The 'cue was excellent, as were the sides: broccoli salad, super-tender ribs, pecan pie, beans, everything. The only thing I hated was the out-of-season corn cobs, but it was my fault for trying to eat an unadulterated vegetable, and I'll never make that mistake again.

Having dined at Guy's American Kitchen & Bar in Times Square once before—backstory: I was texting with a "comedian" and he suggested we go, and I thought it was a bit, I so played along, but then, cut to the next scene, I'm eating cloyingly sweet chicken wings until it's polite to leave—I had zero expectations, but his food was some of the best I ate on the boat. His burgers—at Guy's Burger Bar, by one of the many pools, couldn't tell you where—weren't bad, either.

One of my biggest fears about cruises had been founded: People want to mingle and make friends.

At dinner, there were only a limited amount of tables for two, so most people were seated with other families and friend groups and couples, giving you no choice but to make conversation, which is fine, but also exhausting, and isn't the point of vacation recusing yourself from the relentless demands of society?

People had told me this, but I didn't believe them, but it's true; you really can't. While the Cruise Horizon wasn't going anywhere, I at least expected to feel the waves beneath us, and vomit accordingly. But this was not the case.

4. Queen Latifah is a good sport.

To celebrate the ship naming and to raise money for St. Jude's Children's Hospital, Latifah "competed" in a Lip Sync Battle against the Philadelphia Eagles' Jake Elliott, which apparently will roll out as an entertainment feature on all Carnival cruises (though sans celebrities.)

Much to my chagrin, there was quite a bit of audience participation: cheering, call-and-reponse chants, and a little girl was brought up on stage. This, I'm told, is typical for cruise entertainment. It's not my favorite, but, like Queen Latifah, I put on a brave face and gave it my all.

5. I should have brought something nicer to wear, or at least a back-up outfit for when the rib sauce ruined my shirt.

People dress up! Different areas require different levels of formality. For dinner, people slipped into evening gowns, prom dresses, and shoes that weren't construction boots, so I felt somewhat out-of-place. (Fieri, of course, got a pass.)

These boats are very large and confusing, but that must be the appeal: You can be on them for eight nights and still discover new places/crew-only storage rooms you don't realize you're in until someone asks you to leave.

7. Being in a pool while on the sea is one of the best feelings in the world.

Floating in a hot tub, sipping a Miami Vice out of a plastic cup while fireworks lit up the Jersey skyline, was pretty damn magical. 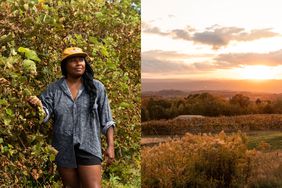