Concentrating their efforts at a single restaurant—at least for now—these chefs are dedicated to making their places as perfect as they can be.

Red Sox fan Hamersley (all of his cooks wear baseball caps) has been preparing exquisite French comfort food at his Boston restaurant for the past 21 years. While he cooks in the open kitchen, his wife, Fiona, runs the dining room and picks the wines, just like the husband-and- wife team at La Ville de Sienne in Nice, the model for Hamersley's Bistro.

San Franciscans might be laid-back, but when they want to celebrate, they promptly book a table at the singular Gary Danko. The chef's sumptuous modern French restaurant has caviar service, suit-and-tie servers and a jeweler's-style case for the farmhouse cheeses. This fall he'll be opening a more casual French place in Ghirardelli Square.

Twenty-two years ago, Susser helped define New World food with his South Florida sensibility at Chef Allen's in Miami. He has remained faithful to his only restaurant but does let his Caribbean-Latin-European tastes spill over into other projects, including New World Cuisine (one of three cookbooks he's written), a line of chef's sauces and even a mango cutter.

In Las Vegas, where his mentors Alain Ducasse and Daniel Boulud have outposts of their empires, Stratta runs the kitchen at a single restaurant, Alex. His Côte-d'Azur preferences—instilled by an Italian father and French mother—clearly shape his flawless menu.

Patterson focuses on one restaurant at a time, beginning with Babette's in Napa, California, then Elisabeth Daniel and now Coi in San Francisco. His obsession is scents, which he cleverly works into his compelling menu, even serving dishes with atomizers full of essential oil.

On the original Iron Chef, Siegel proved so adept at using Japanese ingredients that he defeated a Japanese master. He still adds Asian touches (yuzu gelée, satsuma mandarins) to his French menu at San Francisco's Dining Room at the Ritz-Carlton. He also plays with individual ingredients, such as salt or pepper, making them the theme of an eight-course tasting menu.

When Trabocchi took over the kitchen at restaurateur Stephen Hansen's Fiamma in New York City in 2006, the word osteria, which denotes informality, was dropped from the name of the restaurant. Indeed, Trabocchi's Italian cooking is unrepentantly intricate, marked by indulgences like langoustines and white truffles.

Duo of wagyu beef as both carpaccio and tartare. brguestrestaurants.com.

Since arriving in San Francisco in 2003, Brioza and his partner, pastry chef Nicole Krasinski, have been preparing some of the city's best and cleverest food at the wine-driven Rubicon. Brioza expertly weaves elements from the Mediterranean through his American menu. (A story on Brioza's peach obsession.)

Kreuther has made a pair of restaurants at the Museum of Modern Art two of Manhattan's best places to eat. The chef brings his native Alsatian sensibility to the seasonal French food in both the Dining Room, an elegant restaurant overlooking MoMA's sculpture garden, and the casual, small-plates Bar Room, where the specialties include creamy bacon-topped tarte Alsatian.

Gallante's cooking could easily have been upstaged by his restaurant's 150,000-bottle wine cellar, but the David Bouley–tutored chef proves his gastronomic gravitas at Manhattan's clubby Cru. Using a kitchen full of cutting-edge equipment, Gallante prepares a global menu that's both stunning and experimental.

shows off his bent for reimagining classic flavor pairings.

Mackinnon-Patterson was drilled in the French tradition at Jamin in Paris and the French Laundry in Napa Valley. He has won fame, however, at Frasca Food and Wine in Boulder, Colorado, for interpreting the little-known, regional cuisine of northern Italy's Friuli-Venezia-Giulia. His frequently changing menu is inspired as much by what's in the wine cellar as what ingredients are in season. Staff bonus: The Frasca crew travels to Italy together each summer to creatively refuel.

Maws developed a passion for the farm-raised and the locally grown at an obscure Michelin one-star, Larivoire, outside Lyon, France. At Craigie Street Bistrot, his tiny basement restaurant in Cambridge, Massachusetts, with maroon banquettes and Eartha Kitt on the playlist, Maws makes almost everything on the tightly edited, new-every-night menu from scratch—including charcuterie and pickles.

Lespinasse and Gary Danko alum Keane created his own old-world ethic when he launched Cyrus in the Sonoma town of Healdsburg, California. Under vaulted ceilings of waxed Venetian plaster, servers parade a pre-dinner Champagne trolley and, in season, baskets of truffles (Keane has a weakness for them). His future plans include taking over a local Sonoma hangout, Healdsburg Bar & Grill, and opening a butcher shop.

By cutting the seats at Washington, DC's Komi by about a third—from 64 to 38—Monis lavishes his guests with the kind of attention he must have received from his Greek grandmother. On his avant-garde Med-inspired menu, he transforms her rabbit stew into exquisite roasted rabbit with rabbit broth. 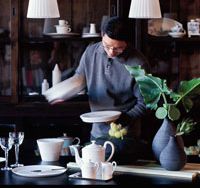 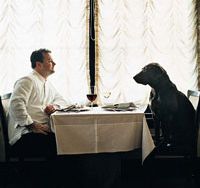