The chef, who says the restaurant will be his "best to date," shares more details on the opening.

Enrique Olvera, the celebrated Mexican chef who permeated American consciousness after he was featured in season two of Netflix's docu-series Chef's Table, is set to open his third American restaurant. After the success of Cosme, which opened in 2014, and the subsequently more casual Atla—both in New York—the chef has been working for the past year to expand westward.

Olvera's forthcoming Cosme in L.A.—which opens at the end of 2018—will be joining an already competitive landscape of Mexican and Latin American dining in the city. There's Ray Garcia's Broken Spanish downtown, Toca Madera in West Hollywood and Carlos Salgado's Taco Maria in nearby Orange County. Yet Olvera's opening is one of the most highly anticipated of the year—and it will probably be a smash hit. The chef's flagship Mexico City restaurant, Pujol, was named to the World's 50 Best Restaurants list; Cosme has been, as well, and its chef de cuisine Daniela Soto-Innes snagged a James Beard Award for Rising Star Chef in 2016.

She'll be working with Olvera for the L.A. launch, which will be downtown in the city's Arts District, Olvera tells Food & Wine. The formerly industrial location, home to citrus packing and shipping, has given way in the past decade to blond wood lofts restaurants like Rossoblu and Church and State.

Olvera's team will start construction within a few weeks. "We're not 100% sure that we'll make the opening before the end of the year, but we're hoping," he says. The whole team from Cosme NYC will be involved; they'll be determining the menu shortly and are still in internal conversations about hiring, Olvera says. It's unclear who the chef de cuisine will be at this stage.

The spirit of the Cosme L.A. will mirror its New York doppelgänger, with one exception: there will be a bar-specific taco menu, just like at Pujol. "The taco bar is really popular at Pujol," Olvera says, and he and his team think the informality of this concept will lend itself well to the city.

"Obviously in California the connection to Latin and Mexican roots is stronger than in New York," Olvera says. "The approach will be the same, but the result will be different."

Even though Olvera has been known for his fine dining—complex 300-day moles and corn husk meringues with corn mousse—he's also been focused on perfecting the taco. While many chefs these days are attempting to elevate the street food with glitzy ingredients like caviar or gold flake, Olvera's approach is to be extremely thoughtful, even compulsive, about sourcing and preparation.

To that end, he's using heirloom corn from California-based company Masienda, helmed by former chef Jorge Gaviria. Gaviria travels Mexico to source varieties of Cónico, Chalqueño and Bolita maize, formerly obscure in the restaurant space. New York's Cosme uses Masienda, and it's likely that the L.A. location will, as well. In California, Olvera will be closer to the source of the heirloom ingredients which form the backbone of all his restaurants.

Thus, his taco bar at Pujol—and his new one at L.A.'s Cosme—will preserve the informality and of the taqueria experience, compressing the time that the taco sits on the plate. It would be ideal, Olvera says, if it went straight from the comal—the tortilla griddle—to the hands of the diner. The efficiency of the bar format allows this to be expedited.

After opening restaurants in Oaxaca, Los Cabos, Mexico City, and New York, Olvera says he's learned a lot with each launch. "It's funny because for every restaurant we open, the old restaurant gets jealous," he says, laughing. "We try not to make the same mistakes twice. I really think L.A. will be the best one to date." 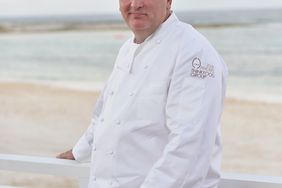