A collaboration between NYC brewers, View from the Top of the Empire State Building Hazy IPA can be enjoyed at a pop-up beer shop in the observatory this month.

In an era where drinkers have about 9,000 breweries to choose from in the U.S. alone — many of which don't distribute beyond their own taproom let alone their own state — it's not uncommon to travel far and wide to score rare beers. But what about traveling high? One of the world's tallest buildings has just gotten its own exclusive beer, and if you want to try it, you'll have to head up 86 floors.

Introduced this week, View from the Top of the Empire State Building Hazy IPA is a new beer sold exclusively at the legendary New York City skyscraper, arriving courtesy of the Manhattan craft beer retail chain Craft + Carry which brewed it in collaboration with Brooklyn's Five Boroughs Brewing.

Last month, in celebration of its 90th anniversary this year, the Empire State Building served beer at its 86th Observatory floor for the first time courtesy of the Bronx Brewery, part of a larger pop-up program that began in August. This month, suds are still being slung as Craft + Carry move in with their own pop-up featuring a mix of six different New York-made beers and ciders, including the exclusive ESB IPA. (That's Empire State Building, not Extra Special Bitter, beer snobs.) The pop-up also features a few food items, one of which is as iconic to NYC as the Empire State Building itself: slices of Junior's cheesecake.

Back to the beer, Craft + Carry describes this hazy IPA as "offering a tropical traffic jam of flavor. Flaked oats balance heavy Amarillo and Citra hop additions — bumper-to-bumper deliciousness." Adding to the Empire State Building flair, the can art features a photo of the tower's built-in binoculars, recognizable by tourists from any era. 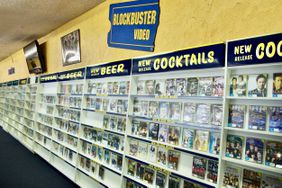 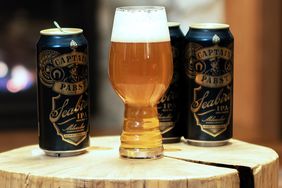