Editor's Note: Why a Recipe Is More Than a Recipe

And how a mistake leads to a conversation.

In the January issue of Food & Wine, we published a story and recipe for Mole Verde from Norma Listman and Saqib Keval, the chefs and owners of Masala y Maíz in Mexico City. And we made a mistake. When we photographed the recipe in our studio, our team approved the use of hot sauce and limes as garnishes for visual contrast—additions that are neither traditional nor suggested by the chefs. The recipe, which Listman had already culturally translated for American cooks, is of historic and cultural significance to Central Mexico and is derived from her family's traditions. We've corrected the recipe and image online to reflect the accurate presentation that they intended. We apologize for including the garnishes. We also thank Listman and Keval for bringing it to our attention, and even more for taking the time and effort to discuss why an addition like this was incorrect.

And while it is easy enough to change the recipe and swap out the photo, we also want to share the resulting discussion with them. Cultivating relationships with chefs and hospitality industry workers is vital to our work, and we are grateful they trust us to tell their stories. We want to do right by them and our readers, own and fix our mistakes when they happen, and take measures to do better in the future. Food serves as a powerful connector, but it can just as easily divide us.

As part of sharing this discussion, we are recommitting to what we refer to as the four Cs when commissioning culturally important recipes: Collaboration, Consent, Credit, and Context.

The following is an excerpt of the chefs' discussion guided by Senior Food Editor Mary-Frances Heck, condensed and edited for clarity.

Norma Listman: Putting a hot sauce on top of a mole is not something that anybody would traditionally do in Mexico, and the addition of the hot sauce brings up a lot of things. The perception of mole in Mexico is different than in the United States, and I think we have to talk about the perception of Mexican food outside of Mexico.

This recipe for mole verde stems from a pipián, which is one of the mother sauces in Mexico, and the recipe dates to pre-colonial times. It has been adapted through the years, and this version is a personal recipe that I developed influenced by my family's mole verde recipe.

It hasn't been until maybe the past 10 years, that there has been recognition of the value and complexity of our cuisine. Mole verde is one of the most sophisticated and delicate yet complex dishes that we have. Adding hot sauce to it devalues the essence of mole on the one hand, but in another hand, it moves it to a different category of food—more similar to Tex-Mex. It also conveys the incorrect idea that all Mexican food should have hot sauce added to it.

I used to teach a mole class called Mole Monday and for many years I developed a lot of my own research too. The worry that I have as a Mexican cook and author of recipes is that there is a magazine here misrepresenting that work. Part of what we do as researchers is educate others about culture. There's a huge need for representation and this misrepresentation devalues the work of those pushing Mexican food forward.

Saqib Keval: The other question that this brings up is the power dynamics of what it means to take a traditional dish outside of its cultural context. Especially when presenting to a readership that isn't familiar with it. F&W's readership is largely American in the US and more recently there is an appreciation for mole, but the reference point from mole is still very limited. We have this idea that mole always includes chocolate or is a slightly sweet sauce, and we lose the context and the richness and the depth and history of these preparations, especially with a dish like a pipián or a mole verde. In Mexico there are so many versions of it, and each one is so regional, has a long pre-Columbian history, and there is an art to making it.

Recipes like this, with this type of reach and age and roots, can be looked at like primary source documents of history. They tell a very particular story of the community where they come from. As the recipes are passed down from generation to generation, they also pass down the history of that generation. When we look at this recipe,we have this opportunity to understand something very profound and we invited you into a history that isn't very well known in the US.

Keval: People in the US might be used to Mexican food as being easily accessible and some variation of sour cream, ground meat, cheese, and salsa. Those are the basic components of a Mexican dish for the American audience, because that was the extent of education that we've had. The headnote we wrote says specifically that this is a special occasion dish. This is not a weeknight meal. Respect that and give that space to a prestige recipe like this, the cultural significance of preparing something that takes so long to make. This was originally done before Vitamix and blenders, where each ingredient is hand ground—that's a kind of a cultural act. There's time and space and importance that's given to prepare this dish and the intention to prepare it for your community. And that's what we tried to capture in the story.

The work of food media is inherently political because you're making culture easily consumed, and you're trying to present it in a way that's culturally conscious and thoughtful. A lot of times it works and sometimes it doesn't, and there's a lot of media that doesn't hit that mark. I would love for readers, your readers and food media at large, to think about is how recipes and food are inherently political. The work of sharing food is sharing culture.

Listman: In a museum, we are touching a painting, wearing white gloves, and trying to figure out how to preserve this art so that more generations will be able to enjoy it in its most original sense possible. The catch for me and where we're torn is in food media and food storytelling where there is inherent white supremacy. That is such a big part of what stories are told, how they're told, how they're presented, and how they're consumed. And then who tells the stories and what culture's narrative is being told.

Get the recipe: Mole Verde con Pollo with Corn Tortillas
Was this page helpful?
Thanks for your feedback!
Tell us why!
Related Articles 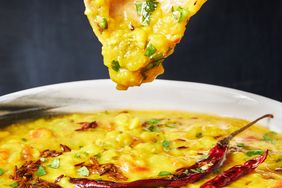