Sure, there's sourdough in San Francisco, and your average assortment of sliced bread and sandwich rolls. But Dutch Crunch is something truly distinctive. Each oblong loaf is slathered in a paste of rice flour and sugar before baking, which crisps up into a speckled, crackly top. There's a similar bread in the Netherlands named tijgerbrood, or "tiger bread," thus the "Dutch" part of the name; the "Crunch" is self-explanatory. Why it's made few inroads beyond the Bay Area is anyone's guess.

The bread Its virtues as a sandwich bread are undeniable. It's dense and doughy with just a hint of sweet, and it has a squishy crumb that can support a hefty pile of sliced meat. Just like the cinnamon streusel is the best part of a coffee cake, the crust is the best part of Dutch Crunch.

"Dutch Crunch rolls have a sweet flavor reminiscent of the white bread you always wanted as a kid, but maybe didn't get if you had whole-wheat parents, as so many of us Californians did," says San Francisco–based food writer Lauren Sloss. "And Dutch Crunch rolls should be soft--really soft. They mold around sandwich fillings, but the tiger-striped top adds texture."

The filling There's no single classic Dutch Crunch order, but the best of the genre, as with Italian heroes or subs, stacks layers of cold cuts, cheese and vegetables in a neat, orderly structure. Pickles, onions, and peppers are all more or less standard, and since this is California we're talking about, avocado is often an option, too.

Where to get it:

Arguello Market "Its Dutch Crunch always tastes fresh," says Sloss, "and the turkey sandwiches feature a freshly roasted strata of dark and white meats. Get the works—add avocado and pepper jack—and you have happiness on a roll."

Ike's Place "Ike has established himself as the sandwich king of San Francisco," according to Sloss, with locations in the city and throughout the Bay Area. Sandwiches have whimsical names, often with a San Francisco tie-in. "I'm pretty into the Lincecum and the SF Giants"--both turkey-avocado-bacon variants--but if getting mozzarella sticks and/or jalapeño poppers on sandwiches is your thing, they've got that, too," she says.

Little Lucca Moving down the Peninsula, this no-frills shack in South San Francisco serves every sandwich (unless otherwise requested) with garlic sauce and jalapeño relish, delivering a powerful one-two flavor punch that soaks into the sandwiches' always-fresh Dutch Crunch bread.

The Village Cheese House Down in Palo Alto, this hidden-away deli in the back of the Town & Country shopping center has been a favorite of locals and Stanford students for decades, and the best sandwiches come on Dutch Crunch. Turkey and avocado is never a bad idea.

Louisville's Original Hangover Cure is a Bacon-Topped Sandwich Covered in Cheese Sauce
Was this page helpful?
Thanks for your feedback!
Tell us why!
Related Articles 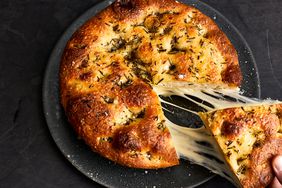